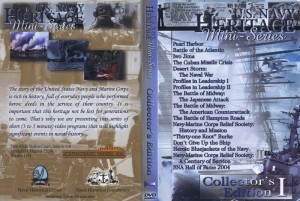 The Naval Historical Foundation produced the “U.S. Navy Heritage Mini-series” video segments in 2002 and donated their use to the Navy, where they were a part of General Military Training and Recruit Training Command programs at Great Lakes, IL. The project enhanced Sailors’ overall understanding and appreciation of the Navy’s rich history and heritage, contributing to a sense of teamwork and unit identity. The Mini-Series consists of 16 five-minute video segments, covering subjects from the Battle of Midway to Desert Storm, and profiling important Navy enlisted and officer leaders and heroes. Below we present 15 of the videos from this series – the final video, the 2004 Surface Navy Association Hall of Fame segment, is not being shown as it is property of SNA.

For information on how to obtain a DVD copy of the mini-series videos, please contact the Foundation.

The Battle of Hampton Roads

Battle of Midway: The Japanese Attack

Battle of Midway: The American Counterattack

Battle of the Atlantic

Don’t Give Up The Ship

Heroic Bluejackets of the Navy