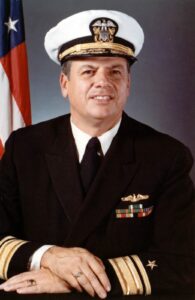 Rear Admiral Kenneth E. Wilson, Jr., graduated from the U.S. Naval Academy in 1947. He served principally in engineering posts during his almost 35 year military career. He served at sea on the cruiser USS Juneau in the Atlantic and Mediterranean areas in the late 40s and on the fast-attack submarine USS Gudgeon with the Pacific Fleet in the early 50s. Among his early assignments was as Repair and Engineering Officer of the submarine tender USS Proteus during its initial deployment in 1961 to the Holy Loch, Scotland, the advanced base for the first Polaris missile nuclear submarines. He also served in the Bureau of Ships, responsible for the concept design of new nuclear submarines and advanced hydrofoil craft, and in the Navy’s management office at Electric Boat Co., Groton, CT, where he was Inspection Officer, and later Design Officer, for the construction of twenty new nuclear attack and missile submarines. After engineering management tours at the Polaris and Poseidon Missile Systems Office in Washington and at the Norfolk Naval Shipyard, he became the Commander of the Pearl Harbor Naval Shipyard in 1970, and at that time was the youngest commander of a naval shipyard since World War II. After selection to Admiral in 1972, he was ordered to Washington where he served in the Naval Sea Systems Command for six years. His final position was as Vice Commander of that office, responsible for the management of all ship research, design, and maintenance, and of the more than 100,000 officer civilian employees at headquarters and in eight naval shipyards and other engineering support offices.