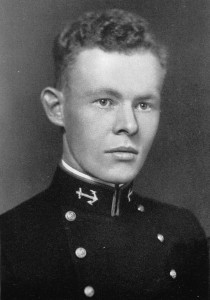 Nimitz as a Midshipman, from the 1936 Lucky Bag.

Famous father aside, the career of Rear Admiral Chester W. Nimitz, Jr., USN is worthy of an oral history because of his own naval service that opened with a tour on the USS Indianapolis with President Roosevelt embarked. He then transferred to the submarine service. He was embarked on USS Sturgeon en route to Manila, when Pearl Harbor was attacked. Consequently, he was among the first to take on the Japanese offensive juggernaut. He conducted numerous war patrols, serving as Executive Officer of USS Bluefish and Commanding Officer of USS Haddo. However, his greatest contribution to the U.S. war effort may have been his work to resolve the problems that plagued torpedo warhead exploders. His discussions of the problem contained herein are insightful.