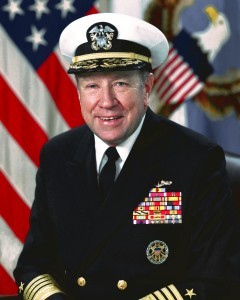 Admiral William J. Crowe, Jr. began his forty-six year Navy career graduating from the Naval Academy in June 1946 with the class of 1947 (accelerated due to World War II).  Following graduation he had air indoctrination training at Naval Air Station, Jacksonville, Florida then joined the destroyer minesweeper Carmick. However, Crowe did not remain with the surface Navy and in 1948, he attended the Submarine School, New London, Connecticut.  After graduating from Submarine School he served aboard the Flying Fish followed by duty aboard the Clamagore. Detached from the Clamagore, Crowe became Assistant Officer in Charge of the Naval Administrative Unit at the Potomac River Naval Command and in this assignment he served as Assistant to the Naval Aide to the President of the United States, Dwight D. Eisenhower.  In 1956, he returned to sea as executive officer on Wahoo only to return to the District of Columbia to serve in a number of positions including the Office of the Chief of Naval Operations.  After commanding the submarine Trout, he attended Princeton University then joined the staff of Commander Submarine Squadron Three and later serving as Commander Submarine Division 31. During the Vietnam War he served as senior advisor for Task Force 211 and Commander Task Force 210. As a flag officer Admiral Crowe served in three four-star billets ending as Chairman of the Joint Chiefs of Staff from 1985-1989.  Following his retirement in 1989 Admiral Crowe embarked on a number of pursuits in civilian life including service as the U.S. Ambassador to the Court of St. James, in Great Britain. Admiral Crowe passed away on 18 October 2007.