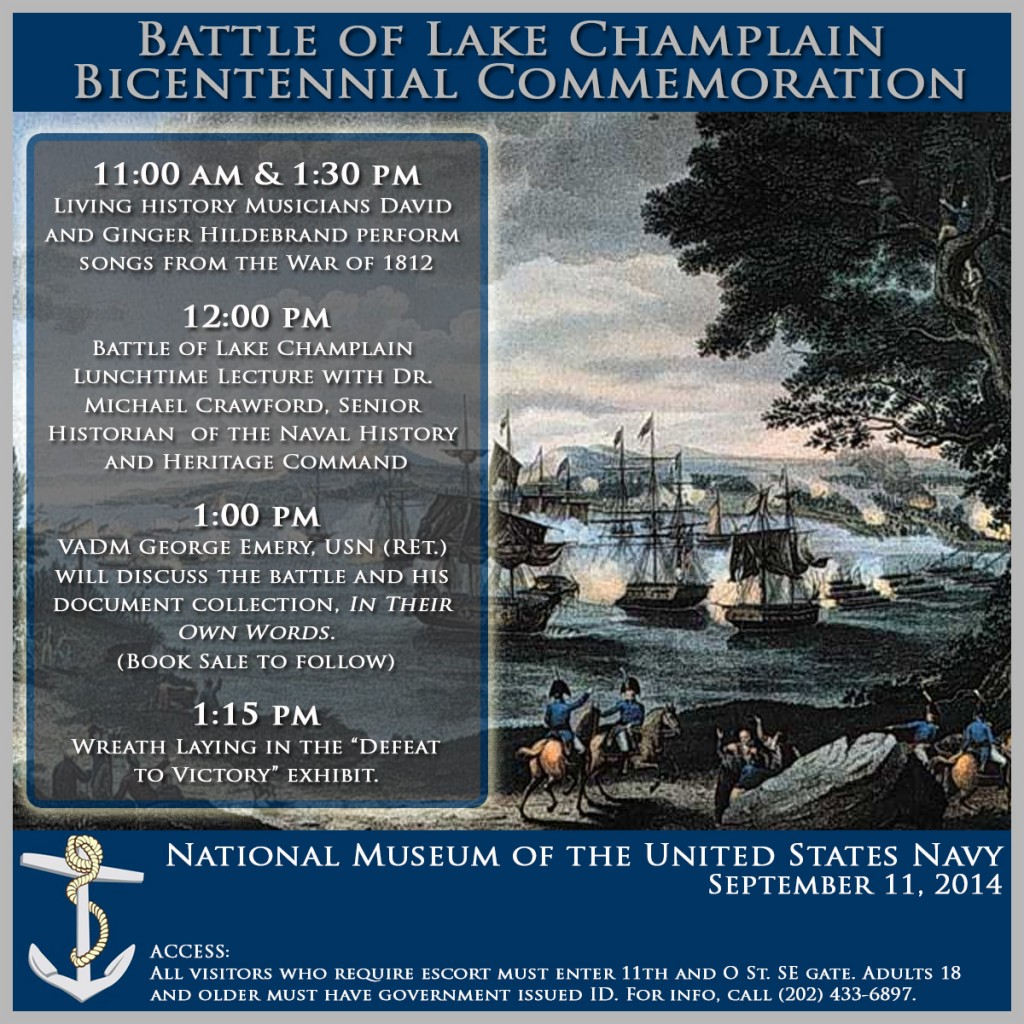 This September 11th, the National Museum of the United States Navy will commemorate the two hundredth anniversary of the 1814 Battle of Lake Champlain, a magnificent tactical victory which proved vital in securing America’s future, with activities throughout the day.

The Museum will host a number of events to commemorate the Battle of Lake Champlain. Noted early American musicians David and Ginger Hildebrand will perform, recreating the charged atmosphere of the War of 1812 through music. The Hildebrands, national experts in early American music, will perform at 11am and 1:15pm with each performance culminating in the true telling of the birth of the Star-Spangled Banner in September 1814.

From 12:00, there will be two talks on the battle. The first will be by Dr. Michael J. Crawford, considering the importance of this often underrated military victory. Dr. Crawford gained a doctorate in American History from Boston University, before teaching history at Texas Tech University and serving a fellowship in the editing of historical documents at the Adam Papers at the Massachusetts Historical Society. A member of the Naval Historical Center since 1982 and senior historian at the Naval History and Heritage Command since 2008, Dr. Crawford’s expertise in the age of fighting sail is evident in his record of publications.

This will be followed by a talk from Vice Admiral George W. Emery, USN (Retired), entitled “Lake Champlain and Beyond…IN THEIR OWN WORDS”, using documents from his recent book, In Their Own Words: The Navy Fights the War of 1812 to demonstrate subsequent impacts of the battle. Admiral Emery has held many posts in the Navy, ranging from being commander of two nuclear submarines to leading US and Allied Submarine forces in the Atlantic. After leaving the Navy, he has had a varied career whilst finding time to write several books and articles on the early navy. After the lectures there will be a wreath laying in remembrance of those who fought two hundred years ago.

Outside the main entrance of Building 76 CMWR will support the celebrations inside. In addition to an ice cream social, it will conduct a burger burn.

The day will also offer an opportunity for guests to visit other parts of the National Museum of the United States Navy, the flagship museum of the Naval History and Heritage Command. With a wide array of historical artefacts spanning from the birth of America into the modern era, the National Museum of the United States Navy offers something for the entire family. The museum is free, opening Monday to Friday from 9am to 5 pm. To access the Washington Navy Yard, visitors without a military ID, Department of Defence Common Access Card, U.S. Government employee ID or and are not law enforcement must be escorted by a member of their party with accepted ID, escorted by museum staff, or call 5 working days in advance for a reservation.

All visitors who require escort must enter the 11th and O Street SE gate to obtain visitor pass and escort. All adults 18 years of age and older must have a current government photo ID, such as a driver’s license or passport. For questions about access or to make a reservation to visit the Washington Navy Yard, please call (202) 433-6897 or (202) 433-6826. Learn more about the National Museum of the United States Navy at www.history.navy.mil/NMUSN, and follow us on Facebook (National Museum of the United States Navy) and Twitter @NtlMuseumUSNavy.