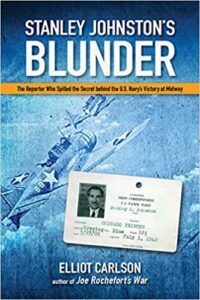 Elliott Carlson has written an exceptionally fine book. It is well worth reading more than once. The only caveat I have is the title: Stanley Johnston’s Blunder. The book is not so much about a reporter’s miscalculation, as about the extraordinary life and times of a perceptive reporter covering two of the most significant events of World War II in the Pacific – the Battle of the Coral Sea and the Battle of Midway.

Midway was the turning point for American forces in the war against Japan. As such, it has been widely written about and is familiar to most readers. Carlson says that Johnston thought Midway was “the biggest naval battle in history.” (page 62) Carlson’s book is more complex than the story of a newspaper article on the battle of Midway.

It weaves into a fascinating tapestry 1) the life and times of a remarkable journalist, 2) the conflicts between two major newspapers, the Chicago Daily Sun published by Frank Knox, Secretary of the Navy under President Franklin D. Roosevelt and the Chicago Tribune published by Robert McCormick, 3) the role of censorship and freedom of the press during war time, 4) the furor of the Navy Department, under Admiral King, and the White House over Johnston’s article which appeared in the Chicago Tribune, June 6, 1942, and 5) an abortive attempt to have a grand jury send to trial both the reporter and the managing editor of the Chicago Tribune, Patrick Maloney, as well as the paper itself for violation of the Espionage Act of 1917. The grand jury failed to indict and the special assistant to the Attorney General, William Mitchell, was left with nothing to show for his efforts but frustration and disappointment. It appeared that he had been hung out to dry by the very persons who had called him to exercise his patriotic duty in demonstrating how the Johnston article had done serious damage to America’s war effort by informing the Japanese Imperial Navy that the United States had broken its code.

The question of whether or not Johnston’s article gave information to the Japanese which would have indicated to them that the United States had broken their code is the issue which holds the book together. Concurrent with that is the question of whether or not Johnston had made use of information from Admiral Nimitz’s secret message 311221
which had been seen by Commander Martin Seligman, Executive Officer of USS Lexington and several others in his suite aboard the USS Barnett in transit to America after the sinking of the Lexington. Carlson presents arguments for and against these matters throughout the book but saves his conclusion for a Coda at the end of the work: “Did the Japanese Know?” There he states, “Quite simply, there is no compelling evidence that the Imperial Navy ever took any action as a result of Johnston’s story.” (page 241). As for Johnston’s knowledge and use of information from 311221 the issue is never completely resolved.

This book is a complex weaving together of character portrayals, personal involvements, biases, and animosities, political intrigue, and insight into the national psyche in the early days of World War II in the Pacific. Stanley Johnston’s Blunder was years in the making and could not have been more thoroughly researched and meticulously documented with attribution to written sources and verbal interviews. It is like a symphony in which the movements, while having distinct motifs, blends them together to make a dynamically satisfying whole.

Not only does the reader get a perceptive treatment of Stanley Johnston, the reporter, but of the intriguing person, not without flaws, living a life which had a profound impact on so many persons with whom he was involved. Carlson describes him as, “expansive and ebullient, always radiating good cheer, Johnston seldom had trouble winning over the people he needed to win over.” (page 20) As a reporter aboard USS Lexington at the battle fo the Coral Sea Johnston distinguished himself by his valor to such an extent that he was recommended by Admiral Fitch, the Task Force Commander, and Captain Sherman, the Commanding Officer for an award by the Navy Department. He never received the award because of political decisions made by President Roosevelt.

The splendid characterization, which Carlson is so good at, does not stop with Johnston and his wife Barbara. It extends to all the major players and not a few minor personalities. The reader feels as if he or she knew Martin Seligman, the Executive Officer of the Lexington personally. The same is true for Patrick Maloney, the Managing Editor of the Chicago Tribune. And, there are so many others.

Stanley Johnston’s Blunder, is so much more than a possible “blunder” by an earnest and avid reporter and his editor and publisher. Johnston certainly knew a great story when he saw one and knew how to get it told compellingly, even if not under his byline. The book will be a stimulating and satisfying read to not only anyone who has an interest in naval history, or the Second World War in the Pacific, but to anyone who can be captivated by the intricate convolutions of political struggles and the role personalities and their presuppositions play in these.
I am pleased to recommend wholeheartedly Elliot Carlson’s Stanley Johnson’s Blunder.

On a personal note, when I was a high school senior in 1949, I won an essay contest for my county sponsored by the Navy League and the Augusta Chronicle. Recipients of the award from 33 surrounding counties were given a three day trip to Pensacola Naval Air Station. We were flown there and back from Augusta on a Navy plane. The title of the essay was “Why Naval Aviation Must be Strong.” My essay had focused on the battles of the Coral Sea and Midway. Carlson’s book not only gave me new insights and information, it brought back cherished memories of my first encounter with the Navy.