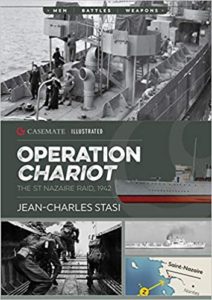 As the author of some twenty books, Stasi divides the 128 page book into eight main sections: “The British Face the Threat of the Tirpitz,” “The Estuary and the Lock,” “Combining Strike Power and the Element of Surprise,” “Newman and Ryder on All Fronts,” “The Flotilla Sails to Warmer Seas,” HMS Campbeltown hits the Bullseye,” “The German Counterattack Traps the Commandos” and “The Price of Success.” The first five sections deal with backstory and preparations for the raid while the last three sections deal with the March 28, 1942 raid itself, the growing German response which doomed many raiders and the aftermath. Previously released in French by Heimdal, the English text flows well with little of the awkward wording from which some translated works suffer.

Highlights of the title include detailed short sections, well-supported by photos and occasional wartime documents such as Lord Mountbatten’s March 3, 1942 note regarding the need for aerial bombardment as an indispensable distraction. Such documents provide more value for the reader than would simply an illustrated work but it remains a work of popular history. There is a brief discussion of the massive Joubert Lock, (or Normandie Dock), the largest drydock outside of Germany able to hold a vessel upwards of 50,000 tons and its critical importance as the central target of the raid. The Joubert lock figured into the planning for the Kriegsmarine’s May 1941 Operation“Rhine Exercise” (Rheinübung) as the vaunted Bismarck intended to use the lock afterwards, so the concern over the potential Tirpitz usage was certainly warranted. Included is the journey of the World War One-era USS Buchanan to British control, renamed HMS Campbeltown and surprising subsequent conversion to a rough copy of the Möwe-class torpedo boat for the raid’s critical ramming and destruction of the lock gates which kept the Tirpitz bottled up in Norwegian waters. Also profiled are the impressive Organization Todt-built submarine pens which provided a haven for the 6th and 7th U-Boat Flotillas based in the sprawling complex with easy access to the Atlantic shipping lanes; these same structures still shelter vessels today.

Stasi also provides a brief look at all five of the Victoria’s Cross awardees from the raid; giving a quick synopsis of their brave efforts and what impact they had on the mission, such as MGB 314’s Able Seaman William Savage who dueled with Sperrbrecher 137 bravely until killed in action. The St. Nazaire raid proved costly with British casualties estimated at 169 killed or missing along with 232 captured of 611 men involved, but in the light of the accomplishments, deemed wholly successful. German casualties were estimated at 400, including those killed in the delayed explosion of the Campbeltown.

The book features over 100 photographs which cover not only the British commandos and the German defenders but also a number taken in recent years such as the raid’s central focus, the critical Joubert Lock, and the Old Mole. Stasi assembled a selection of old photos which provide some before-and-after glimpses of St. Nazaire, along with modern photos, including images of surviving British veterans. There is also an excellent graphic which shows an overhead view of the harbor with all the relevant structures noted, including major defensive positions. There are also “In Profile” images which feature the battleship Tirpitz, USS Buchanan / HMS Campbeltown, the Fairmile B Motor Launch & Fairmile C MGB 314 and the MTB 74 along with torpedo boat Jaguar to great effect, using profile drawings to show the appearance and armament of the various craft which played major roles in the raid. Finally, the graphics include a survey of coastal defenses of the Loire estuary and a seaborne map of the British route.

Jean-Charles Stasi’s Operation Chariot: the St Nazaire Raid, 1942 is a useful introduction to the decisive commando raid, drawing from some archival materials and survivor interviews. While admittedly costly, Operation Chariot not only checked the Kriegsmarine’s potential deployment of the Tirpitz but more importantly provided a much-needed two-fold victory of military success and psychological boost for the Allied cause at a time when fortunes were waning. Since this title chronicles a critical 1942 commando raid with profound implications it is a useful addition to any bookshelf, especially for those who ponder how properly conceived and coordinated combined operations can influence overall military success.