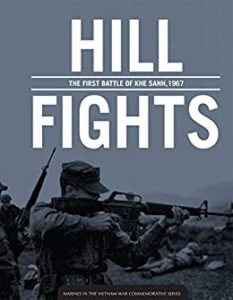 The legendary siege at Khe Sanh occurred in 1968, but during the spring of 1967, the United States Marines fought in northwestern Quang Tri Province in what became the first stage of the Khe Sanh battles.  Rod Andrew, Jr., a history professor at Clemson University and colonel in the Marine Corps Reserve, has written an easily read and thoroughly well done analysis of the 1967 conflicts between the North Vietnamese Army (NVA) and the United States Marines in the Khe Sanh area.  Designed as a vehicle to educate and train current Marines, the book is part of the fiftieth anniversary commemoration of the “Hill Fights” or “First Battle of Khe Sanh” in Vietnam.

The purpose of the book was to describe the heroism and fighting of the Marines during the battles.  Andrew well showed the valor of the Marine units involved in the conflict.  While the thinly stretched Marines fought on the ground, they received close air support to counteract the aggressiveness of the NVA, particularly in the areas known as Hill 881N and Hill 881S.

The terrain in western Quang Tri Province proved to be thickly covered in jungle vegetation and provided numerous areas for the NVA to build tunnels and underground bunkers.  The Marines called in aerial support in an effort to eliminate the NVA’s defensive structures because the so-called “highway” into the region was little more than a dirt road.  The air support dropped five hundred pound bombs and napalm on the NVA’s positions, yet, despite the heavy bombing of the area, the NVA’s tunnels and various other shelters often remained intact causing few casualties to the enemy.

Because of the Marines’ reliance on helicopters to bring in weapons and supplies and to evacuate their killed or wounded, the NVA quickly learned to take advantage of the Marines’ desire to care for their brethren by removing them from the battlefields as quickly as possible.  With the need for helicopters made apparent, the author gives a thorough analysis of which helicopters were best for the battles at 881N and 881S.

While the book is devoted to the Marines’ involvement in Khe Sanh, the United States Army’s approach to the conflict is briefly noted.  Andrew discussed the Army’s view of conventional warfare versus the use of counterinsurgency and pacification that the Marines hoped would succeed.  The Special Forces (aka Green Berets) units at Lang Vei were only mentioned briefly and seemingly as an afterthought to the Marine efforts.

The details provided by Col. Andrew gave the reader an easy to follow explanation of the battles that were often fought hand-to-hand.  He also gave definitions of terms, such as “spider hole,” that might be unknown to the casual reader of books about Vietnam.  The question that went unanswered was how the NVA built their fortifications without the Marines hearing any of the construction that went on in the area.  There was no mention of the use of stethoscopes and divining rods that assisted the Marines to locate the NVA’s underground structures.  Another question that arose from the reading was whether or not the leaders of the Marine Corps and Army changed too frequently in Vietnam resulting in oft changing strategies to defeat the NVA?  Andrew also clearly showed the Marines always cared for their comrades in arms.  The brief volume provides a detailed, well-written analysis of the valor of the Marines during the first part of the battles at Khe Sanh and is definitely worth reading.