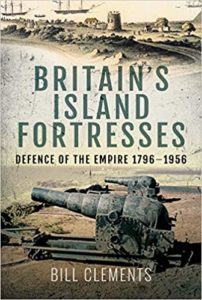 In Britain’s Island Fortresses, Bill Clements, a former British Army officer and Defense Attaché, provides a detailed account of the evolution of the defenses of the British empire’s strategic overseas island bases.  Clements is well-suited to the task, having written two previous books on British fortifications.  This book provides an overview of several key island’s fortifications and how each contributed to maintaining the Pax Britannica.  Each chapter of Clements’ book is focused on major fortresses, such as Singapore, Ceylon, Bermuda, and Jamaica, as well as lesser known fortifications, such as St. Lucia, Mauritius, and Ascension.  The author acknowledges the omission of Britain’s Mediterranean island fortress of Malta, since so much has already been written about it.

The author begins each chapter with a brief background on the history of each island and goes on to detail the evolution of its armaments and fortifications in light of both developing technology and the changing status of perceived threats.  He also covers the various imperial commissions and committees tasked with evaluating the status of the defenses and providing recommendations for their upgrade and improvement, as well as how fiscal considerations and constraints shaped their construction and modernization.  He highlights the inadequacies of these fixed defenses as representative of the numerous short-comings of British defense policy and posture in the Far East in the inter-war years.

Only three of these island defenses (Singapore, Hong Kong, and Ceylon) were tested in war, and he details the battles for each.  The author outlines the rapid Japanese offensive against British outposts in Asia in 1941-42 that led to Hong Kong’s relatively expeditious conquest and Singapore’s surprisingly swift capitulation.  He makes the rather obvious conclusion that in modern war these fortresses were completely inadequate in the face of combined air and land power and concludes that static fortified positions for the most part had outlived their strategic purpose. The British Army finally disbanded its coast artillery in 1956, ironically in the same year the Suez crisis marked Britain’s imperial decline.

While elements of British naval and defense strategy and policy and their evolution can be gleaned from individual chapters, this book does not provide an overarching or comprehensive narrative on these subjects.  Rather, the author goes into great detail on the technical evolution of both the armaments and fortifications of these islands.  Readers interested in armaments and ordnance will be impressed with the level of detail and research as the author describes the placement and specifications of the guns and fortifications as they evolved from smooth-bore to breech-loading rifled guns.  To complement this narrative, the author includes numerous black and white photos, many from his own personal collection.  The inclusion of an appendix on artillery specifications, a glossary including technical fortification terms, and maps showing the layout of each island’s fortifications are helpful as well.

This work will primarily appeal to those interested in the study of fortifications and the maritime history of the British Empire; however, the book indirectly provides some intimations of the strategic problems and hard decisions facing Britain in the 19th and early 20th centuries that may shed some light on contemporary issues for the United States.  Just as British defense policy had to deal with the rise of strategic competitors in the face of increasing fiscal pressures, so too does the United States today find itself in a similar situation.