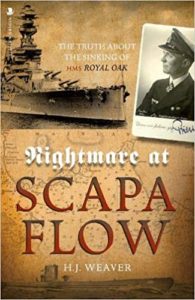 The version reviewed is a 2019 paperback re-printing of the original, published in 1980. The author, some forty years ago, had access to many of the original sailors and witnesses, both British and German, and provides first-hand accounts of their recollections. He analyzes contemporary documentation from both British and German sources. The purpose of the book is to recount the same, the historical record, prior treatises on the subject, and to attempt to reconcile the differences if possible, and to identify errors, when not.

On the night of October 13-14, 1939, HMS Royal Oak, a Royal Sovereign class battleship, was at anchor at Scapa Flow in the Orkney Islands off the north coast of Scotland. She had been commissioned in 1916, and was one of five of her type, the others being the lead ship of her class, and the Revenge, Ramillies, and Resolution. She fought at Jutland, but by 1939 was obsolescent. She participated, in October, 1939, in the search for the German battleship Gneisenau, but her speed, then less than 20 knots, was incapable of keeping up with the fleet. She anchored at Scapa Flow on October 11, 1939, it being hoped that her anti-aircraft guns could assist in anticipated German air attacks on the harbor. It was believed that the harbor was impregnable from attack by submarine, the entrances being controlled by booms and blockships, but more security in the form of additional blockships were being placed as Royal Oak anchored.

As dawn broke the morning of the 14th, the notion that Scapa Flow was impregnable from attack by sea was one of which the Admiralty had been disabused. Royal Oak laid at the bottom of Scapa Flow, with the loss of 833 officers and men who went down with the ship or died in the water, having been hit by 4 torpedoes of U-47, a Type VIIB submarine of the Kriegsmarine under the command of Kapitänleutnant Günther Prien. The basic facts of the attack are well-established. That night the tide was one of the highest of the year. U-47 was able to pass between the blockship Soriano and the shore of Kirk Sound, and enter the harbor. After less than an hour, KptLt. Prien commenced his attack. At 1:04 a.m. a torpedo hit the starboard bow of the Royal Oak, but it was believed that it was a minor internal explosion and no defensive action was taken. KptLt. Prien, seeing no reaction, returned for a second attack, and sent three more torpedoes from 3000 yards, all of which found their mark at 1:16 a.m.

By 1:29 a.m., Royal Oak rolled to starboard and sank. U-47 was able to pass back through Kirk Sound and return to Wilhelmshaven, where the ship was met by Grand Admiral Raeder and Admiral Dönitz. Thereafter, KptLt. Prien and his crew were flown to Berlin for an audience with the Führer. In addition to the human loss, the loss of the Royal Oak was a public relations nightmare for the Admiralty, and a bonanza for the Nazis, and the predictable recriminations and propaganda ensued.

The details of that night, however, were deeply in conflict from the various sources. The Admiralty convened a Board of Inquiry that took testimony. Günther Prien allegedly wrote an account of the attack, Mein Weg Nach Scapa Flow, published in January, 1941, which was actually written by others and which, according to an interview with his widow, had numerous errors known to Prien. Prien was lost in March, 1941, with U-47, in a depth charge attack by HMS Wolverine.

The author interviewed many of the survivors of the Royal Oak, met with many who had been aboard HMS Pegasus anchored nearby, and those on the rescue vessels. He corresponded with Admiral Dönitz, and examined the historical documents, many of which are quoted in the native German, and attempted to reconcile the differences in the details of exactly who did what, where, and when. The book is written with great precision, but in a very readable form. The only criticism the reviewer has is the failure, at least in this version, to provide a chart which reflects all of the landmarks to which reference is made. For example, the author states “[o]ff Howequoy Head, with everything still quiet, U-47 turned to starboard and made her way north again for a second attack”. The only chart in the book doesn’t show Howequoy Head. More often than not, geographic references are not shown in the diagram of Scapa Flow, and the reader is left without
reference. With the availability of the internet, the reader can now generally locate the references through external sources but, in 1980, this must have been problematic.