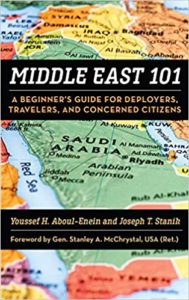 The Middle East is an undeniably complex region. Its unique ethnoreligious composition, political layout, and violent history make understanding the region a formidable task. In their book Middle East 101, Youssef Aboul-Enein and Joseph Stanik provide a digestible overview of the Middle East, spanning from ancient times to the twenty-first century. The authors present their survey of the region’s history in light of American interests and involvement. As intended, their work’s targeted approach offers a practical understanding of the region for members of the U.S. armed forces and for otherwise concerned or inquisitive citizens.

Aboul-Enein and Stanik divide the work into 101 questions about the Middle East. Beginning with several questions pertaining to the region’s demographic and geographic makeup, the authors then embark upon a chronological breakdown of the Middle East spanning from the earliest reaches of the historical record to the present day. After completing the historical narrative, the authors dedicate the final questions of the book to Islamic extremism and efforts to counter it. Responses to the 101 questions range in length from several paragraphs to several pages. While best if read in sequence, each question and response can be selected and read by the reader at random. This valuable organizational feature enables the reader to carefully choose subjects to research while moving freely across the historical timeline. The reader is not bound to any particular order in which to study the region but can customize his or her study at will. Additionally, a reader dissuaded by time-intensive study for whatever reason stands to benefit from the work’s organization. The use of independent questions and answers creates short, yet complete and coherent threads of information for the busier reader who may only have small pockets of time to invest in learning about the region.

Middle East 101, while aimed at giving readers a relevant understanding of the Middle East as it exists today, includes substantial coverage of ancient and medieval eras, including detailed political and religious history. Such detail serves to satisfy the curiosities of the more historically-minded reader. That said, some readers may at first question why such information is necessary for understanding the region in its present form. Aware of this possibility, Aboul-Enein and Stanik repeatedly make explicit connections throughout their work between historical details the reader may be tempted to take for granted and tangible impacts those historical details still have on the region’s ongoing developments. The authors present information with a sense of purpose, obviously mindful of their intended audience of those serving, or about to serve, in the Middle East.

Those with little knowledge of the Middle East looking to begin their own study of the region would do well to begin with Middle East 101. The work covers foundational topics, including basic geography; the major beliefs of the Islamic faith; and other vital factors in the region’s history that one should know before attempting to grasp the intricacies of unfolding events in the Middle East.

Nevertheless, while written as a “beginner’s guide,” Middle East 101 also has something to offer more experienced or knowledgeable students of the region. The authors’ focus on that which is relevant to those serving, or about to serve, in the Middle East is not common in other works covering the same general material. This unique focus results in a synthesis of information that offers new paradigms through which readers may view aspects of the region studied previously.

Middle East 101 further sets itself apart from many similar works covering the region in that it does not serve to perpetuate an East versus West narrative. Western society, the United States military included, has long held onto the notion of ideological, political, and, frankly, existential differences between the Eastern and Western worlds. This mental framework, in practice, presupposes inherent misunderstanding, tension, and even conflict between the two. Aboul-Enein and Stanik offer a fair and balanced survey of the region in a manner that will undoubtedly facilitate greater understanding and mutual respect between the United States and the nations of the Middle East.

Middle East 101 is a great addition to the arsenal of works specifically dedicated to educating our nation’s leaders and defenders. Any member of the United States military who cracks open Aboul-Enein and Stanik’s latest work will put it down better equipped to serve in one of the world’s most volatile yet strategically vital corners.