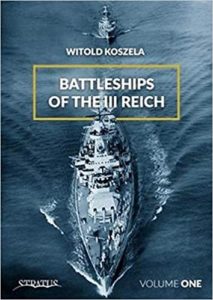 Witold Koszela, author of Battleships of the III Reich, Vol. 1, is a prolific writer who has penned many books about several nations’ warships.  Among these are histories of the British Nelson and King George V-class battleships, several books about American battlewagons, including the South Dakota and Iowa classes, and books about other countries’ warships.

Koszela recently set his sights on the capital ships of the German Navy, especially those constructed during the interwar period.  He identifies seven battleships which the Kriegsmarine utilized before and during World War II.  Volume 1 deals with the first four, the pocket battleships Deutschland/Lützow, Admiral Scheer, and Admiral Graf Spee, along with the battleship Scharnhorst.  Readers will have to turn to Volume 2 for descriptions of the Gneisenau, Bismarck, and Tirpitz.

The initial volume is divided into five chapters.  The first covers the Reichsmarine under the Weimar Republic (1921 – 1935) and later the Kriegsmarine (effective 21 May 1935).  The remaining four sections trace the histories of the three pocket battleships and the first “true” battleship, though some historians classify the Scharnhorst and her sister Gneisenau as battle cruisers.

Koszela does a very nice job describing the genesis of the pocket battleships.  Germany was restricted by the Treaty of Versailles (1919), not the Washington Naval Treaty (1922).  Accordingly, the Germans were faced with the conundrum of building replacement battleships with a maximum standard displacement of 10,000 tons, at a time when other nations were building battleships of over 30,000 tons.  The panzerschiff or “armored ships,” though they all displaced more than the maximum tonnage allowed (p. 94), were the best available option. Combining the attributes of a cruiser and a battleship, each was armed with six 11-inch guns, and meant to be “stronger than the faster and faster than the stronger” (pp. 26+29).  In theory these ships would be able to outrun anything they could not outgun, and outgun anything they could not outrun.  With a maximum speed of slightly greater than 28 knots, this was initially true except for foreign battle cruisers, which could outgun and outrun the pocket battleships.  Purists will object to terming pocket battleships as true battleships; indeed, the author noted the remaining pocket battleships were reclassified as heavy cruisers in early 1940.  Nevertheless, Koszela provides clear reasons why they are included in his history of German WW II-era battleships.

The two figures who had the most influence over Germany’s post-World War I capital ships were Admiral Erich Raeder and Chancellor Adolf Hitler.  Raeder was initially skeptical, but he became the leading proponent of using these warships as commerce raiders, a role for which they were “perfectly suitable” (p. 25).  It was unfortunate for his navy that Hitler had ultimate control over the fate of Germany’s battleships because he was, according to the author, “totally ignorant about ships and the tactics of naval warfare” (pp. 11+12).

The pocket battleships had diesel rather than steam turbine engines.  This saved weight and provided greater endurance than their predecessors, but the propulsion plants had a tendency to break down.  One is struck by how much time the pocket battleships and Scharnhorst-class battleships spent in shipyards undergoing repairs (pp. 31, 53, 145).

The pocket battleships all had combat deployments during the Spanish Civil War.  Koszela terms the Deutschland “a symbolic ship, with arguably more symbolic significance than genuine achievement in combat” (pp. 52-53).  Admiral Scheer had a successful commerce-raiding cruise and fulfilled the fleet-in-being role by tying down inordinate numbers of British ships which had to hunt for her throughout the vast Atlantic Ocean.   The Admiral Graf Spee had a short, but noteworthy life.  Koszela does a nice job indicating why Captain Hans Langsdorff chose to scuttle his ship rather than continue to duel with British warships after the Battle of the River Plate.

The Scharnhorst was originally intended to be the fourth pocket battleship, but the Anglo-Germany Naval Treaty of 1935 superseded (at least in the Germans’ minds) some of the Versailles Treaty’s restrictions.  This, plus the newly commissioned French Dunkerque-class battleships, with 13-inch guns and a top speed of 31 knots, built specifically to counter the pocket battleship threat, caused the Germans to design a 31,552-ton true battleship.  The Scharnhorst and her sister carried nine improved 11-inch guns and had a top speed of over 31 knots.

The Scharnhorst and Gneisenau sank the Royal Navy aircraft carrier Glorious, and had a successful almost-two-month-long commerce raiding cruise in late 1940 and early 1941.  However, their April 1940 losing encounter with the battle cruiser HMS Renown and the Scharnhorst’s demise in 1943, demonstrated why they were under orders not to tangle with capital ships.

In this volume, there is much to like and little to critique.  For such an expert and prolific author, one cannot help but note writing errors, though minor in nature, are fairly numerous.  In addition, ships’ types are misidentified, i.e., KMS Blücher, HMS Hood and HMS Repulse are termed battleships (pp. 24+129).  The pocket battleships’ standard displacements noted on p. 94 do not match those in the specification tables of the three applicable chapters.  An overall appraisal of the effectiveness of the four warships would have been useful, but that may come in Volume 2.  Finally, maps would have been helpful.

Koszela’s observations about these noteworthy warships will inform novices, battleship buffs, and even experienced naval historians.  The more than 180 pictures, tables, numerous scale plans, technical drawings, and two-page fold-out profiles only enhance the written pages.  This volume will take pride of place on beginners’ and scholars’ bookshelves.

Purchase your copy of Battleships of the Third Reich today!