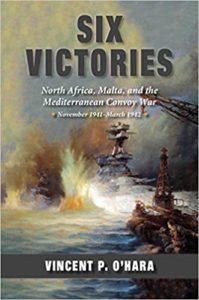 Vincent P. O’Hara opens his newest work, Six Victories: North Africa, Malta, and the Mediterranean Convoy War: November 1941 ̶ March 1942, by stating that victory has a hundred fathers. The phrase originates from the diary of Mussolini’s son-in-law, Galeazzo Ciano but O’Hara intends it as a metaphor for the hundreds of small details that result in victory. In Six Victories, O’Hara examines a five-month period of World War II when the Royal Navy and Regia Marina battled for supremacy in the central Mediterranean. The title, Six Victories, reflects the quick reversal of fortune experienced by the Royal Navy, and illustrates how military success, often measured in big events, should also consider the “cumulative impact of little deeds.”

O’Hara illuminates the little deeds of military success by examining doctrine, technology, training, and command, and showing “how communications and intelligence  ̶  along with logistics, infrastructure, and geography  ̶  influenced operations and impacted the application of sea power.” O’Hara provides his analysis of both big events and little deeds through the filter of how they relate to sea power and sea denial. Sea power is defined here as the “ability to transport personnel and material freely over the oceans and the ability to deny that use,” and sea denial as the “ability to limit the enemy’s maritime traffic even if one’s own sea traffic is limited.” Using these definitions, O’Hara concludes the Regia Marina performed better than historians have previously thought.

In November 1941, the British established maritime superiority in the central Mediterranean and maintained high hopes for quickly extending that superiority from Gibraltar to Suez. However, a succession of Italian victories in December quickly snatched the initiative from the British by establishing the Regia Marina as a credible threat to Royal Navy operations for the next six months. O’Hara examines the big events and little deeds that made this possible.

The success of Axis operations in North Africa depended upon the Regia Marina’s ability to supply them via convoy, denying Malta as a base of operations for the Royal Navy to attack those convoys, and blocking British convoy access to Tobruk and Benghazi. The British, and, perhaps, historians as well, may have underestimated the capability of the Regia Marina. O’Hara makes his case in support of this with a multitude of statistics supported by an impressive array of maps, tables, and charts. Ultimately, the inability of Axis convoys to consistently supply ammunition and fuel and other supplies to Rommel’s Afrika Korps, combined with successful Allied efforts to supply Malta and the British 8th Army, led to the defeat of Axis forces in North Africa. Before reaching that point, though, the loss of the cruiser Neptune and destroyer Kandahar from the Malta striking force, and damage to cruisers Aurora and Penelope, and battleships Queen Elizabeth and Valiant, all in short order, turned the balance of power in the central Mediterranean upside down and handed maritime superiority to the Axis.  The Regia Marina maintained that status until Operation Torch introduced Anglo-American forces into French North Africa in November 1942.

Vincent O’Hara is an independent scholar of naval warfare and author of multiple previous works on the Mediterranean theater during World War II. Six Victories is the result of substantial new research using primary records from Italy and the United Kingdom, and students of World War II will be pleased with the effort. And there is much with which to be pleased. Besides a thesis that closely examines the relationship of convoy traffic to military success in the central Mediterranean, O’Hara discusses the not-insignificant role played in that success by intelligence, logistics, and communication. His reassessment of the First Battle of Sirte will give readers pause for thought, but overall Six Victories is an up close and personal look at the factors that led to triumph and reversal, told from the perspective of “the hundreds of details that are the true fathers of victory.” This work is a significant contribution to the naval history of the Mediterranean theater of World War II and one that students of naval history will surely want on their shelf.