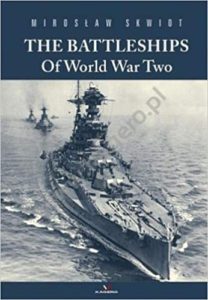 In his introduction (p. 7), Mirosław Skwiot, author of The Battleships of World War Two, Vol. I, notes his book about World War II-era capital ships is a “photo album” with “unique photographic material enriched with the brief combat record of individual battleships.” Skwiot’s objective is to allow readers to visualize the changes these dreadnoughts underwent from commissioning to scrapping. The generally succinct operational histories of these behemoths are presented to help readers “trace their story.” The author’s contribution to the long list of battleship books and the primary strength of this volume are the well over 200 pictures of several nations’ battleships and battle cruisers.

Mirosław Skwiot is the author or co-author of numerous works about World War II warships. These include: Japanese Battleships, 1905-1942; German Capital Ships of the Second World War: The Ultimate Photograph Album; The Battleship Gneisenau; and histories of the Japanese aircraft carriers Soryu, Hiryu and Kaga among several others. In this current history of capital ships, he utilizes his expertise, vast collection of battleship photos, and a broad net to capture additional pictures of “those beautiful ships.”

In Volume I, Skwiot reviews the capital ship histories of the following navies: Argentina, Brazil, Chile, Greece, Spain, Japan, France, and Germany. Those battleships and battle cruisers, which were in commission or took part in operations during World War II, are examined. These include older World War I-era dreadnoughts and newer battlewagons built and/or completed in the interwar period or during WW II. In a typical section, the author describes the building of these warships in terms of keel laying, christening, launching, commissioning, and operational service. Appropriately, better-known battleships, such as the Bismarck and Yamato, are provided with longer and more detailed descriptions of their operational careers. Lesser-known battleships receive shorter treatments.
This book’s organization and layout are a bit unconventional. In describing these battleships’ building phases – from keel laying to commissioning – Skwiot generally omits descriptions of the vessels’ characteristics, such as armament, armor, speed, endurance, etc. Instead, the reader has to turn to the appendices (pp. 265-276) for this information. An informal short bibliography is also provided on these later pages. There are no formal citations per se. Also, instead of consistently organizing the descriptions of a particular nation’s capital ships according to class, one finds the Fuso appropriately introduced first among the Japanese battleships, and her sister ship, the Yamashiro, next to the last of the twelve WW II-era Japanese capital ships.

Though the operational and combat records provided are brief, even the experienced battleship buff will find some interesting tidbits. For example, most high school students may be familiar with the Anglo-German naval arms race being one of the proximate causes of WW I. Fewer will be aware of the naval arms race between Argentina, Brazil, and Chile at the turn of the twentieth century. It originated when Brazil announced a battleship expansion program in 1904 (p. 27). The more experienced European shipbuilders, notably Great Britain, Germany, and France, were surprised when Argentina turned to the United States to build its two battleships.
Just as the US Navy sent a squadron of battleships to assist the British during WW I, Brazil planned to send her two dreadnoughts to aid the Royal Navy; but this never came to fruition. A similar arms race occurred in the Mediterranean. The Greek Navy purchased two American battleships in reaction to the “remilitarization of the Turkish Navy.” (p. 48) Finally, the author notes, Chancellor Adolf Hitler on 5 June 1934 agreed to the addition of a third three-gun turret for Scharnhorst and Gneisenau, (compared to the two turrets of their pocket-battleship predecessors). He was, however, consistently opposed to increasing the gun caliber beyond 11-inches (280 mm) (p. 233). This left them under gunned against their most likely opponent, the French Dunkerque class, which was armed with 13-inch (330 mm) guns.

Skwiot should have been better served by his proofreaders and editor. There are examples of awkward sentences, such as: “The building of “Hiei” began on 4 November 1911 at the Yokosuka shipyard, because her construction in accordance with the contract signed was planned in Japan according to the plans developed for the first ship of this type.” (p. 75) Some minor factual errors include: Hiei and Kirishima were both sunk in November 1942, not December. (pp. 77 + 95) The author asserts the Ise and Hyuga’s remaining two-gun main turrets “were replaced with new three-barrel ones” after they were converted to hybrid carrier-battleships in 1943. (pp. 88-89) Yet, pictures of these ships on pp. 90-92 clearly show them still with two-gun main turrets after their 1943 conversion.

As the author intended, the primary reason this book was published was to make its more than 200 pictures available. They are the main contribution of this volume. A novice reader seeking to learn more about capital ships would do well to start with one of the more conventional studies. This volume can then be consulted to bring images of these dreadnoughts to life. Skwiot has performed a valuable service in making these many photos available. One looks forward to his publishing a second volume covering the American, British, Italian, and Soviet navies.

Purchase your copy of Battleships today!