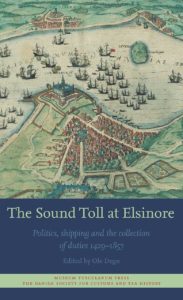 As the title suggests, this anthology provides varying perspectives on the tariff collected in the sound that runs between Denmark and Sweden thus joining the North Sea to the Baltic Sea at Elsinore.  For over 400 years beginning in the mid-15th century, the Sound Toll played a significant role in European politics and, in particular, tied Denmark economically and politically to the European continent and Russia.  Just as tariffs today create substantial controversy in the media, the Sound Toll presented significant political challenges to the Danish monarchy in levying them and to those trading nations that had to pay them to transit the Sound.  The book consists of 16 articles from 14 historians, with each article separated into its own chapter, covering the varying changes in the toll over the decades; the details of the customs house and toll collectors; and the significant political struggles and implications associated with the toll.  Despite the predominantly Danish influence and European perspective within the book, the US plays a prominent role in the elimination in 1857 of the largely obscure Sound Toll, as described in the chapter entitled “The American-Danish Sound Toll Controversy.”

The first five chapters lay out the historical origin of the toll under Eric of Pomerania, the establishment of a royal charter for the toll, and the development of its administration including the customs officials, the varying toll houses, and the diverse forms of accounting used throughout the centuries.  They provide a vibrant background for the next eight chapters which discuss in wide-ranging detail the myriad political intrigues associated with the toll.  While the articles vary widely in their breadth and style, all of them are extensively footnoted and exquisitely illustrated bringing some of the mundane accounting evidence into vivid and stimulating detail.  A large portion of the work in these chapters is based around the original labor of Nina Bang, the first woman to earn a degree from a Danish university at the turn of the 20th century and the eventual Minister of Education of Denmark.  Her efforts to catalogue and categorize the massive amount of accounting data contained in a variety of logbooks and index slips from nearly four centuries was a significant step in articulating the history of this vital transit tax.  Her two published volumes, in 1906 and 1922 with her co-editor Knud Korst, form the backbone of this compilation.  Nonetheless, her work is not without controversy and some of the authors go to great lengths to both explain as well as criticize the shortcomings of her original historical methodology while expounding on her innovative work.  The final two chapters discuss some of the technical details of the archived materials and how they are used to form the historical narrative.  Interwoven between these final two and the first thirteen chapters is the significant article concerning American involvement in the Sound Toll.

Kalevi Ahonen, a University of Jyvaskyla, Finland lecturer in General History, articulates the American status in the Sound beginning at lowly ‘non-priviliged vessel’ – which resulted in higher toll rates and, often more confounding, undue delays while awaiting the customs officials – to the oversized American role in the elimination of the Sound Toll in 1857.  Tolls were first levied on merchant vessels of the newly independent United States in the Sound in 1783 even before the final signing of the Treaty of Paris that year.  Ahonen credits John Quincy Adams as the first American foreign minister to publicly question the toll just a few years later at the beginning of the 19th century, though, from the American perspective, the toll was just a minor inconvenience relative to privateering and the Barbary pirates.  Nonetheless, the toll continued to vex the American notion of the freedom of the seas and the topic of the Sound Toll aggravated several administrations for the first half of the 19th century.  Ultimately, the United States, in 1855, provided the government of Denmark a one year notice that it would no longer accept the Sound Toll and within two years, following additional political maneuvering by the Danes, the toll was no more.  Another quarter century later, Mahan would indelibly coalesce this theory of freedom of the seas and the right of free transit passage into his seminal work “The Influence of Sea Power on History.”

While the “Sound Toll at Elsinore” contains primarily European historical detail and intrigue, its single chapter on the Danish-American controversy is an outsize portion that provides a bulwark to the American doctrine of freedom of the seas.  In addition, in light of today’s tariff driven trade wars it provides a historical perspective that enlightens the current debate.  With its extensive footnotes, wonderful illustrations, and detailed bibliography with over 700 references, this book is worthy of consideration for the library of any serious scholar of naval history.

Review by Commander Daniel “Heed” Orchard-Hays. CDR Orchard-Hays is currently assigned as military faculty at the Joint Forces Staff College in Norfolk, VA where he teaches joint military planning and touches on naval history through the Yorktown campaign.  A Naval Flight Officer, he flew in F-14D Tomcats and F/A-18F Super Hornets for much of his career.

Purchase your copy of The Sound Toll at Elsinore today!