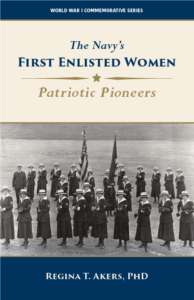 Women have volunteered to serve during every war or conflict since the U.S. fought for its independence in the 18th century. However, there is little written on women’s roles in winning the nation’s wars relative to the amount written on men’s roles. The contributions of women and other minorities are less understood, but no less important. As an author, it takes a special interest and dedicated research to document the more subtle, yet critical, contributions women made to enable the rise of the U.S. as a hegemonic power in the 20th century.

In her monograph The Navy’s First Enlisted Women: Patriotic Pioneers, Regina T. Akers captures some of the important contributions women made during World War I using a variety of first person accounts and archival documents. Although there are more comprehensive writings on the service of women during World War I, this is the only volume focused solely on American women who served in the Navy. For example,  Lettie Gavin’s book,  American Women in World War I: They Also Served,  covers the service of women in the Navy, Marines, Army, Red Cross, Salvation Army, and YMCA. Lynn Dumenil’s book, The Second Line of Defense: American Woman and World War I, traces how women left traditional female roles to work in the civilian sector and in the military both home and abroad. Dumenil also adds a substantial focus on the contributions of African American women. Although Akers mentions the efforts of different minorities in her book, she focuses on women, writ large.

Akers opens her book with a brief history of warfare beginning with the nation’s fight for independence from England. She mentions the challenges faced by multiple minorities while setting the stage for how women made an important impact in the nascent stages of the nation’s largest maritime service. Focusing on World War I for most of her monograph, she traces the less visible, yet critical roles women filled in freeing men for combat duty. Over 11,000 women voluntarily answered the call to enlist, mostly to perform clerical work and administrative duties, assemble munitions, transport classified material, transcribe document, or assist nurses in overseas hospitals as yeoman, master-at-arms, or mess attendant third class. The Navy did not include basic considerations for these women as there were no preparations for training, housing, uniforms, or physical fitness. The women often worked 10-12 hours, then were required to participate in training at night. Because of this, the women faced extra challenges such as isolation and tedium. The jobs they performed were not glamorous and women looked for ways to make a more meaningful contribution to no avail. Additionally, subtle and over discrimination was prevalent as there was no provision for advancement to the officer ranks and all African-American women were initially denied the ability to enlist. It was not until 1918 that 14 black women were allowed to enlist and contribute to the war effort as clerks in the Muster Roll Division at under the supervision of a male African American.

Most male sailors welcomed women with the exception coming from the men in higher ranks who had been serving in the Navy the longest. Even through the tedium and isolation, the women persisted and earned well-deserved accolades from President Woodrow Wilson and others. When the war ended, the female yeoman were expected to return to traditional pre-war roles. The biggest compliment women received at the end of the war was when they were allowed to perform their wartime duties as civilians. All the female yeoman were demobilized by 1919 once they fulfilled their four year term of enlistment. These women continued to fight for proper recognition of their service when many of them were given other than honorable discharges because the male officers in charge believed they would never again serve. This discriminatory action left potential employers to doubt the capabilities and loyalty of the women veterans. The media helped challenge this gender discrimination by publishing opinions highlighting the unfair treatment. By highlighting the issue, some of the discharges were changed to honorable.

Akers summarizes the book with acknowledgement that even with all the challenges, these women would do it all again given the opportunity. In the epilogue, she adds context on how those early contributions manifested in both progress made and challenges endured by women sailors throughout the 20th and into the 21st century.

Akers effectively covers the history of the Navy’s first enlisted women, their contributions, and the challenges they faced both while serving and once they completed their tours of duty. She weaves an illustrative narrative connecting facts with emotion. Readers are left with an appreciation of the contributions of these brave women and an understanding of the barriers they broke while laying the foundation for the progress and equality women largely enjoy in the military today. This short monograph is a worthwhile read and offers an understanding of the often underappreciated contribution women made in winning the nation’s first major war of the 20th Century.

The Navy’s First Enlisted Women is available for free online, courtesy of the Naval History and Heritage Command, or may be purchased here.