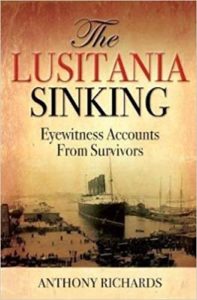 The torpedoing and then sinking of the Cunard liner Lusitania on 7 May 1915 is of course one of the iconic events of World War I—with broad military/naval and diplomatic consequences.  Anthony Richards tells the story from a human perspective, with the bulk of the book drawing upon contemporary accounts and oral history in addition to interviews conducted many years later.

In particular, Richards focuses on the experiences of Preston Prichard, drawn from some 200 letters that Richards acquired for the Imperial War Museum.   It is a rich trove of material that Preston Prichard’s family accumulated in their attempt to find out what happened to Preston, whose body was never found.  Preston Prichard had moved to Canada from Liverpool in 1905 and in 1913 enrolled at McGill University to study medicine.  At the end of his second year, he decided to travel home to visit his family.

Richards provides some of the standard background about Lusitania—its launching and its early fame.  In May 1915 the liner departed from New York City’s Pier 54, amidst numerous warnings that it would be sailing into a war zone.  Yet, as Richards notes, “there was a widespread refusal to believe that anything untoward could happen to the ship.” (p. 27)  Lusitania actually left New York two hours behind schedule—leading one to consider one of the many “what ifs…” of the story.

The book does a good job describing shipboard experiences on this final voyage and goes beyond the standard focus on socializing and “high society.”  Passengers were trained in using life jackets and lifeboats, were prohibited from displaying any light (matches, for example) on deck, and were instructed to cover portholes.  There was, of course, much discussion about the war and German submarine activities.  Then, of course, there was the torpedo.  Richards demonstrates the amount of confusion and indecision in the reactions, even as the Lusitania began to list dramatically, and  sink very quickly.  Should the lifeboats be lowered? Many people did not believe that the ship would sink.  All in all, Richards effectively depicts the “confusion, chaos, and disorder” (p. 59) and, ultimately, the sinking.

Chapter 6, “Adrift,” provides a number of snap shots of people in the water after the sinking.  These snapshots range from dramatic, to sad, to heroic, and in some cases amusing.  For example, one older woman left her teeth in her cabin.  Or, a woman describes passing out in the lifeboat; when she came to she emotionally called out for her baby, and a Frenchman  sitting next to her said “If you’ve lost your husband, don’t worry, you come and live with me.” (p. 78).  But lurking behind these very human stories is the underlying issue:  what happened to Preston Prichard?  The basic answer is: we don’t know.

Richards’ focus on one specific victim— Preston Prichard—amounts to an effective case study of the human side of the tragedy.  (The book concludes with an extended homage to Preston Prichard.)  The Prichard family engaged in an extended search for their son, and the book includes extended excerpts from letters sent to the Prichards in response to their inquiries.

After focusing on the human side of the sinking, the book then reviews the more conventional aspect of the story—how people in Europe and the United States reacted to the sinking. The standard narrative suggests that the sinking was a significant factor in bringing the United States into the war.  Richards argues that Lusitania was a factor but not necessarily the key factor.  On the other hand, the sinking clearly did contribute to anti-German sentiment, and the book provides numerous examples of that reaction.  Ultimately, Richards suggests, the impact of Lusitania’s sinking was not clear cut.  And even identifying who was responsible can be complicated.  Richards argues that Germany, Lusitania’s Captain Turner, Cunard, and the British Admiralty all had some responsibility.

Richards has used standard secondary and primary sources, and especially archival sources at the Imperial War Museum, the National Archives of the United Kingdom, and the University of Alberta Archives in Canada.  The book includes a section of excellent photos and illustrations but could use some standard maps.

Purchase your copy of The Lusitania Sinking today!