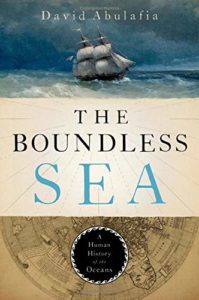 Make no mistake about David Abulafia’s The Boundless Sea, it is a monumental work, tackling the largest subject on the planet, the seas, and having as an overlay of that story the planet’s most perplexing creature — humans.

At almost 1,000 pages of text, The Boundless Sea is not a book that is going to be finished in a week of sittings; but taken in doses, even small ones, Abulafia’s writing is compelling, moving like strong currents from one sea into an another.

From the preface: “The Roaring Forties that would helpfully sweep sailing vessels from the Atlantic into the Indian Ocean were the same winds that made entry into the Pacific from the southern Atlantic, around Cape Horn, so frightening.”

With those two experiences, this reviewer was immediately thinking of Vasco da Gama turning northward on the eastern coast of Africa and Ferdinand Magellan battling his way into the Pacific. But I was also remembering how surprised I was when I learned that American privateers in the Revolution used their mariners’ knowledge of those winds to head into the Indian Ocean to wreak havoc on British shipping, and how David Porter fixed-mindedly, and probably ignoring orders, drove Essex westward determined to make British whalers in the Pacific pay for a new war with the United States.

Starting in the Pacific, the “oldest ocean,” Abulafia (now retired as a chairman of the history department at Cambridge University and known for his scholarship on the Mediterranean Basin) writes with startling simplicity as to how islands, like Hawaii, came to be populated.

“The Hawai’ian islands cannot have been discovered by accident; the winds simply do not permit an accidental arrival from, say, Samoa. …This must have tested their navigational abilities to the limit.” He then carefully walks the reader into how humans came to be there and, for that matter, to New Zealand.

In both instances, he reminds us as to how this part of the story ends: “the population turned its back on the sea and regular contact” between them “and the rest of the Polynesian world.”

Time and again, Abulafia pulls threads like these into the larger cloth of this ocean, that ocean, and how they all came together when humans use these waters to migrate, to trade, to reap its bounty, to steal from one another, to make war, to proselytize — the whole range of mankind’s experience.

Memorable sections of Boundless Sea occur when he puts “Prince Henry the Navigator” into proper perspective, of his time and ours – an important figure but not the be-all and end-all of the “Age of Exploration.”

Abulafia rightfully comes down on the important contributions of the Genoese, Christopher Columbus and John Cabot, as well as the Portuguese, in the scramble with better ships to find trading routes to the East and avoid the Arab traders at all costs.

“‘Discovery’ was not a purely European phenomenon, but those who were carving out new routes across the oceans were Europeans.” Into that Genoese mix, he puts the Portuguese da Gama and  Magellan; “Juan Rodriguez Cabrillo, the Spanish discoverer of California, and Francis Drake, sailing in the service of England.”

In Drake’s case, that’s surely an understatement as he and his cousin John Hawkins were busily privateering the Spanish treasure fleets in the 1560s and 1570s — something for the queen, a lot of somethings for us.  In the case of the Portuguese and the Spanish, they were looking for ways to cut the Ottomans/Arabs out of the spice trade picture, diverting those profits from the Indies “directly to Christendom,” undermining the economy of the Muslim world.”

Holy war, with an economic twist.

As for “allies in this struggle” against Muslims, at least to Spain’s Ferdinand and Isabella, would be “Prester John[who] was never far from these thinking of these new-style crusade strategists.” “Prester John” was the mythical Christian ruler — on some throne, somewhere, probably East Africa, for centuries poised for action whenever alerted by Westerners.

Of course, it never happened. That Prester John never existed.

Zeroing in on historic antecedents to behavior we see now, the chapters related to China are extremely interesting.  In one paragraph, Abulafia seemingly sums up president Xi Jin-ping’s ambitions in the South China Sea today and tomorrow.  In doing so, he also explains how the Chinese view the first and second island chains away from the Mainland as beholden to them, and, in a slight stretch, justifies its laying down the markers of the “9-Dash Line” in the late 1940s to demand “this is ours — and always has been.”

“On the one hand, the Chinese emperor was master of the word; on the other he could not actually rule over the entire world — a difficulty all claimants have had to face. But that did not mean he should pass by the opportunity to demand from countries right across the world recognition of his authority.  Once again, what comes through powerfully is the insistence of the Chinese on their superiority as a moral force,” be it Confucianism, Maoism, Communist Party capitalism.

Abulafia points out more than once that it was not great empires like the Chinese, the Spanish, the Portuguese, the British, and the Americans who maintained the sprawling commercial networks.  Instead, they “have often been maintained by maritime nations that stood between great empires,” nations kept the systems functioning.

This fall, readers interested in maritime history are blessed with this marvelous book from a scholar with a deft touch.

Purchase your copy of the Boundless Sea today!