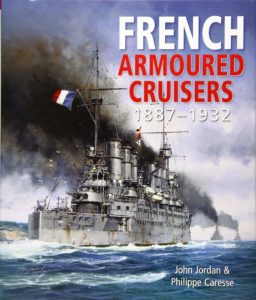 Between 1887 and 1910, France built 26 armoured cruisers. These ships were built as single units or as part of a class of ships that numbered between two and five units. Despite the homely looks of French warships during this period, French naval architectural design, at this time, was in the forefront in the employment of wing turrets, in the place of side mounted casemate guns, and in the employment of small water tube boilers capable of generating high steam pressure in powering the ships.

In this book, each of the French armoured cruiser classes has their own chapter of 14 to 20 pages. Each chapter provides background on the the design of the armoured cruiser class under discussion, along with a detailed look at their hull, armor, superstructure, boilers, machinery, turrets, armament, and crew quarters. Both those interested in the mechanical and the armament aspects of warship construction will find much of interest in this book. After a close examination of the material aspects of these armoured cruisers, every chapter ends with a short operational history of each ship under discussion. Each of these chapters is supported by a wonderful array of high-quality technical drawings and photographs of these armoured cruisers. The technical drawings are of two types: The first provides the reader with a full perspective of how each ship looked during its life, while the second focuses on examining in detail various components of that ship.  These drawings are complemented by numerous clear and well-defined photographs which show these armoured cruisers in various settings and time frames. The technical details of the ship drawings and photos should appeal to both the naval historian and the ship modeler. It must be noted that the metric unit of measurements is used throughout the book in describing these ships.

The last two chapters of the book are concerned with French naval operations during the period 1914 to 1922. French armoured cruiser operations during World War I are the heart of this section. The French Navy’s main theater of operations from 1914 to 1920 was the Mediterranean. In the waters of the Mediterranean, Aegean, and Adriatic Seas, the French Navy engaged warships and submarines of the Austro-Hungarian Empire, Germany, and Ottoman Empire. During the course of this fighting, four of the 23 surviving French armoured cruisers were lost in battle, one to mines and three to U-boat attacks. Of interest in this section is the account of French naval operations directed against neutral Greece. Other French World War I armoured cruiser operations included searching for German surface raiders in the Atlantic, Indian, Pacific Oceans, and the Caribbean Sea, guarding of the English Channel, and patrolling the waters of the Red Sea and near Germany’s African colonies. Post-war French armoured cruisers saw service in the Arctic Ocean and the Black Sea in support of anti-Bolshevik forces and in the Eastern Mediterranean observing the Greek-Turkish War. All of these naval front accounts are supported by excellent detailed maps.

The book closes with a summary of the post-World War I demobilization of the French Navy. This demobilization resulted in all of the surviving French armoured cruisers being laid up. While most of these ships were disposed of by 1930, four of the French armoured cruisers were still afloat when World War II erupted, one Polish (sold to them in 1926) and three French. All four of these ships were seized by the German Navy for use as barrack ships, and all four were lost during the war.

Overall, the book offers a fascinating look at the French Navy during the years leading up to World War I. The French Navy is normally no more than a footnote in the naval story of World War. Yet, within the pages of this book, one comes to understand how the French Navy served as an integral part of the grand strategy that defeated the Central Powers.  The book is well-written and the photos and illustrations of the armoured cruisers are all sharp and clear. It is an excellent addition to any naval library.