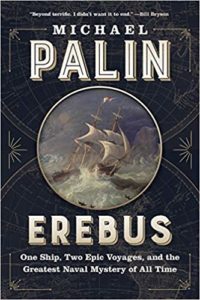 History is full of mysteries and the fate of HMS Erebus and her sister ship HMS Terror remained among these mysteries until only a few years ago.  With the discovery of the ships remains, Michael Palin, tells the biography of the Terror from her success in the Antarctic to her fate in the Canadian Arctic during the Franklin Expedition of 1845.

Michael Palin is not only an accomplished author and travel adventurer, but is most famous for his acting in TV programs and films, specifically Monte Python.  While doing research for a talk on Joseph Hooker, he first learned about the HMS Erebus and her successful voyage to the Antarctic under the Ross expedition (1840-1843).  With the announcement of the recent discovery of the ship by the Prime Minister of Canada a few weeks after the talk, Palin knew he had his next topic for exploration and publishing.

Being from Great Britain, there is always a connection to the sea and a sense of exploration.  Palin delves into his research by not only scouring historical documents and personal correspondences of the crew, but also visiting the locations where the HMS Erebus sailed and speaking with local experts.  Bringing in his knowledge of travel and sense of storytelling, Palin weaves in his visits to the most remote areas of the globe where Erebus sailed and the British locations where her journeys began.  The smooth transitions between these two associated stories helps the reader in understanding not only the landscape, but also the culture that exists in these often remote locations of the world.

The book is also unique in that it is a biography of the ship.  Palin starts from the initial construction of her in Wales and ends with information obtained from her final resting place off the Adelaide Peninsula in Canada.  As with any biography, family is important and HMS Erebus’ sister ship, HMS Terror is also researched and included in the story.  Both ships sailed together during the Ross expedition to the Antarctic and were refitted for the fateful Arctic expedition under Franklin.  Palin’s research of letters and journals by the crew and those involved with the ships allows for a comprehensive understanding of what life was like onboard from not only the perspective of the officers, but some of the able bodied seamen as well.  These excerpts allow the reader to relate with the challenges, triumphs and hardships that Erebus went through over her voyages.  Palin, who admits to not being a naval historian or mariner, takes care to explain the multiple nautical terms throughout the book, while also providing context for other literary peculiarities common in the 1800’s, but lost on today’s reader.

When writing on a maritime mystery that has seen multiple other articles and publications, it is difficult to create a work that adds to the volume of knowledge and gives the readers something new to enjoy.  Palin does this by bringing a different perspective by not writing solely on the Franklin expedition, but telling the biography of the ship and the crew that served on her and the places she traveled.  Readers expecting to only hear about the Franklin expedition will find that only the last third of the books covers this event, while the first two-thirds cover the preceding 19 years and the highly successful Antarctic expedition under Ross.  For those seeking significant insight of what happened during the Franklin expedition, there is a slight sense of abruptness at the conclusion of the book with Palin traveling to the final locations of Erebus and Terror, but has little more to offer in the conclusion.  Hopefully, Parks Canada will continue to explore the national historic site located near the village of Gjoa Haven on King William Island and provide additional insight of the wrecks.  Parks Canada has expressed the desire to eventually allow tourists to visit the sites and experience history just as Michael Palin has done while following the voyages of Erebus.  Until then, this book furthers the understanding of HMS Erebus as it highlights the risk and rewards of exploration in the 1800’s in a narrative that is enjoyable for both a scholar and for a novice interested in maritime history and exploration.

Purchase your copy of Erebus today!