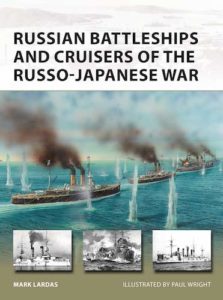 Mark Lardas’s Russian Battleships and Cruisers of the Russo-Japanese War (New Vanguard #275) delves into the little discussed Russo-Japanese War. In particular, the Imperial Russian capital ships that fought in the losing effort against an unexpectedly tough opponent in the first defeat of a European power by an Asian foe, with strong repercussions for all of the European powers who never thought the day would come when a capable foe would rise from the Orient to challenge them.

Lardas divides the book into three main sections: “Design and Development,” “Operational History” and “Statistics and Histories.” First, “Design and Development” provides critical insights, such as “Four technologies dominated warship design between 1880 and 1905: propulsion (steam engines and boilers), metallurgy (armor and ship structure), ordnance (including torpedoes) and communications (wireless telegraphy).” [5] The most important change in naval architecture was the triple-expansion steam engine, along with the shift from fire-tube to water-tube boilers. Another important change involved improving armor types: from wrought iron in the 1860s to compound armor in 1880 to nickel-steel in 1889 and finally to Krupp steel by 1894. An interesting observation by Lardas concerns the cause of Russian ship loss, “No Russian battleship…experienced a penetrating hit by a Japanese 12in. shell,” so the armor, regardless of type, was sufficient. Damage control proved much more difficult for the Russians and sank far more ships than armor-penetrating rounds, due to the more effective picric acid-based Shimose powder. [7] Lastly, while some Japanese scout cruisers benefitted from wireless ability the Russians made no effort to use the technology and paid accordingly.

Second, “Operational History” provides insights about the period leading up to the Russo-Japanese War, of which perhaps the most important is the role of the Sino-Japanese War “as a catalyst for a massive expansion of the Imperial Russian Navy.” [18] The victory over China caused considerable concern about Japan where previously the Russians viewed them as no threat. Expansion began with an eye toward ships that could travel from the Baltic, where the main Russian fleet was based and all the construction and repair facilities existed, to the Pacific in order to keep a suddenly threatening Japan from further expansion.

Lastly, the “Statistics and Histories” section provides more specific ship-related details which cover all the different Baltic-based ships involved in the Russo-Japanese War from battleships to coastal defense vessels to lowly cruisers. Lardas includes a range of interesting vignettes such as the valiant and suicidal charge of the battleship Retvizan during the Battle of the Yellow Sea. Trying to distract from the damage done to the Tsarist flagship Tsesarevich, as the First Pacific Squadron tried to flee for Vladivostok, the Retvizan turned and charged at the Japanese fleet which allowed the wounded flagship to reach Tsingtao and internment, “the only Russian battleship in the Pacific to survive capture or destruction.” [37] Valiant Retvizan survived the battle, even while damaged by the fire of multiple enemy battleships and large armored cruisers, yet was later lost to the Japanese under their siege guns at Port Arthur. [34]

The book features the typical cutaway which spans two pages [12-13], in this case the Borodino-class battleship, four of which (Imperator Alexander III, Knyaz Suvurov, Borodino and Oryol) were built in time to take part in the conflict in the Far East. The aforementioned cutaway illustrates several important details of the design, such as the rear-facing single 15-inch torpedo tube in the stern (another such torpedo mount existed in the bow), the machinery and details of the aft 12-inch gun turret and the engine room with associated boilers and funnel uptakes. The cutaway is also helpful for understanding how the secondary armament hoped to defend the ship from most directions, such as the 6-inch turrets, the 3-inch side mounted guns, down to the smaller 1 and 3-pounder weapons. Coincidentally, a painting detailing the torpedo room gives a good idea of the machinery involved which launched such a short-ranged weapon, as “Russian torpedoes could only travel 1,000 yards.” [9]  Mark Lardas’s Russian Battleships and Cruisers of the Russo-Japanese War takes the reader to the heralded clash between European and Asian powers which changed history, focusing on the Imperial Russian hulls that challenged Imperial Japan for dominance. At a time when naval technology increased faster than the shipyards could keep up, the Russians fielded a variety of ship designs using differing technological advances, none of which averted defeat. As this title deals with an important time in naval history which shapes the future of naval warfare, it is a welcome addition to any bookshelf as a useful reminder of the challenges faced when imperial hubris overwhelms decision-making.