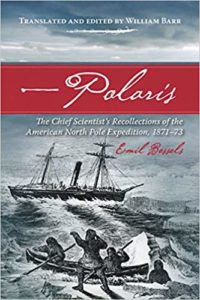 During the second half of the 19th century the North Pole became the ultimate goal of polar research and various nations stepped up to organize expeditions to reach 90-degree North. After expeditions like the First and Second German North Polar Expedition failed to reach this goal, it was the US to give it another try. Unlike the mainly privately sponsored German expeditions, this time the expedition was the action of a nation. With the help of Secretary of the Navy George M. Robeson, Charles Francis Hall secured a $50,000 grant from Congress for an expedition to reach the North Pole. Despite of the expedition being directly financed by Congress, Hall hired a multinational crew mainly from the US, Germany, and Scandinavia with many of the crew having experience in Arctic whaling. This was a notably different composition of crew than earlier British polar activities that were mainly relying on the Royal Navy personnel. Chief scientist of the expedition became Emil Bessel, a German Arctic researcher and physician who had already participated in one of the earlier German polar expeditions. Overall command of the expedition and its vessel Polaris, the former Navy tug Periwinkle, was in the hand of Charles Francis Hall, who had already two polar expeditions under his belt and needs to be considered as one of the most experienced US polar researchers of his time despite being self-educated without either naval nor scientific training.

While the Polaris expedition failed to reach the North Pole, it reached 82° 29′ N by ship and thus a new farthest north for a polar research ship.

Scottish-Canadian historian William Barr provides now for the first time an English translation of Emil Bessel’s recollections of the Polaris expedition. This servers as a most important contribution to a more complex understanding of the history of the expedition, the rising tensions among the members of the expedition, and ultimately Hall’s death— with this point being the most interesting as Bessel was also the suspect for having caused Hall’s death by poisoning. While the recollections of the suspect will not ultimately clarify if Hall was poisoned or if the use of drugs was an appropriate treatment given the circumstances, as concluded by the official board of inquiry in 1873, Bessel’s writing in the congenial translation by William Barr will help to understand how and why Hall and Bessel disagreed on various critical decisions during the expedition and at least indirectly to get an idea why suspicions developed that Bessel might have poisoned Hall.

Although the Polaris expedition is among the very few polar expeditions where a true capital crime might have happened, and this alone would be enough to recommend the book, the true value of making this source available to an English language readership are the extreme detailed descriptions provided by Bessel beginning with leaving the Brooklyn Navy Yard on June 29, 1871, the visits to various Greenlandic settlements, to the separation of the crew into two groups, and finally the return to the US in 1873 after finally having been forced to give up the ship. Already the descriptions of the various ports of call on the way to the North like St. John’s (Nfld.) or Upernavik on the west coast of Greenland are rare gems and will be of interest to any reader interested in the history of these places, but the most interesting element of the book for any reader with an interest in maritime history and/or leadership on seagoing vessels is without doubt the description of the erosion of discipline, authority, and respect onboard the Polaris. Sometimes hidden between the lines, sometimes openly mentioned, Bessel provides the clear picture that Hall was by no means qualified to provide the leadership required onboard any ship and in particular a polar research vessel with a diverse crew and a good number of strong individuals. With S.O. Budington and G.E. Tyson, both former whaling captains, serving as sailing master and assistant navigator the Polaris had de facto three captains and Bessel clearly showcases how this situation alone resulted in substantial difficulties due to the lack of accepted authority.

With the book being a translation of the contemporary recollections of a member of the expedition Barr does not provide much new historical research results but provides access to an important source that was previously not available to an English readership. In addition, Barr provides a brief but concise record of the attempts to figure out what really caused Hall’s death and why these attempts needed to be inconclusive. Also, he provides valuable information on the formal board of inquiry that investigated Hall’s death and had also come to the conclusion that there was not sufficient evidence for murder.

Altogether this book needs definitely to be recommended to any historian with an interest in either history of polar exploration or an historic example of failed leadership in a maritime context. To the non-professional reader the book can also be recommended as it tells not only a well written story about polar research in the 19th century, even including a potential murder, but provides detailed and nuanced descriptions of life and work onboard ships in the polar regions and the places visited during the expedition, and makes the reader sometimes feel like actually participating in the journey itself. Regardless if reading the book as a primary source for polar history or if reading the book as an evening read for entertainment, Barr’s translation of Bessel’s recollections of the journey of the Polaris will definitely not disappoint the reader.