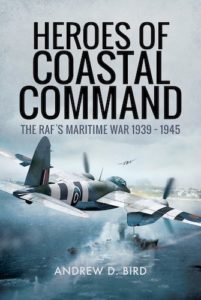 During the Interwar Years, the leaders of the Royal Air Force preached that the next war would be a short war. The war would be won by bombers which, in a matter of days, would inflict so much damage on the enemy’s urban centers that the civilian outcry would force the country’s leaders to surrender. However, when this type of warfare was put to the test in 1939 and 1940, it proved incapable of providing the results the leaders of the RAF had promised. Most unsettling, despite the fact that General Billy Mitchell had sunk a German battleship in a bombing exercise, the sinking of submarines, warships, and merchant ships which were maneuvering at sea was an almost impossible task for high altitude horizontal bombers. Yet, to bring the bombers down to a lower altitude that improved their probability of hitting a moving ship invited destruction from the ship’s anti-aircraft guns. The RAF’s solution to this problem of how to sink enemy craft maneuvering at sea was the formation of Coastal Command, which was assigned the mission of securing the seas around Great Britain.

The biographical accounts of the above eleven men provide a wide-ranging insight into the operational history of Coastal Command. Each biographical account highlights a different aspect of the responsibilities of Coastal Command. The eleven men among them were awarded one Victoria Cross, six Distinguished Service Medals, seven Distinguished Flying Crosses, and one Mention in Dispatch.

Each biographical account focuses on the action for which the individual won an award for bravery, with the story fleshed out by providing information on how that person arrived at that scene of action. Many will find the tale of the heroic action each of these individuals performed the climactic moment of the chapter being read. Others, I am sure, will find much more intriguing the path the individual took that resulted in him being placed in a situation that resulted in his making a decision to attack in the face of considerable odds that the attack would fail.

While the reviewer found all eleven biographical accounts of Coast Command pilots fascinating reading, the story of Lt. Col. Guedj was the most compelling. A Moroccan Jew, he and his family were in France when it fell. His story of his escape from German occupied France and his journey to England to join the Free French is great reading. This account is topped off by his becoming a pilot in Coastal Command and flying long distance aerial strikes against German shipping. His story climaxes with an attack by sixteen RAF Mosquito aircraft on shipping at Leirvik, Norway, in which five of the attacking aircraft were lost, one of which was flown by Lt. Col. Guedj.

The book is an engrossing, but one sided, read of the RAF practicing sea control in the waters around Great Britain during World War II.