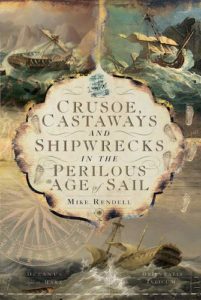 To celebrate the 300th anniversary of the publication of Robinson Crusoe by Daniel Defoe, Mike Rendell’s monograph explains the influences that inspired Defoe’s novel, as well as the hazards that the early European seafaring community encountered while sailing the seas.  The author looks into the real-life stories and adventures of men and women who had been castaway at sea under various circumstances. Initially, the book appears to be a discussion of how Defoe became a successful author and how his book was inspired by actual stories that continue to fascinate readers in the twenty-first century. While most people believe that Alexander Selkirk is the most important inspiration for the Robinson Crusoe novel, Rendell explains that there were other castaways who influenced Defoe’s character, including Henry Pitman, Robert Knox, and William Dampier. Convincingly, Rendell showed that Defoe took parts of each of those sailors’ stories to show that Crusoe’s life was not based solely on Selkirk.

From there, the book expands to explain the hazards of sailing in the eighteenth century emphasizing the hurricanes of 1703 and 1783 during which time literally thousands of British navy sailors and officers were lost at sea. Rendell details the ships that were damaged or sunk.  The author successfully explained that environmental hazards, such as hurricanes and hidden shoals, led to numerous disasters at sea. Other problems for the vessels included poorly built ships, lack of lighthouses, and simple human error.

Rendell devotes part four of the book to lesser known castaways and their experiences.  He discusses the Dutch East India Company’s incident with Batavia in 1629 that led to women being turned into sex slaves and moves on to the “Forgotten Slaves of Tromelin” who survived off the coast of Madagascar for fifteen years. Not to be forgotten, Rendell also discussed Fletcher Christian’s mutiny and Captain William Bligh’s successful overcoming of his castaway status.

While the book is an easy read and brings to light castaway experiences that few are likely to have heard about, such as Charles Barnard and Leendert Hasenbosch, the book is more like a series of articles rather than a monograph with a unified thesis. The impact of the environment, the abilities of sailors to take command under stress, and the desire to explore are all featured, but a stronger thesis that tied the chapters together more succinctly would have made for a better book.

Reviewed by Diana L. Ahmad, Ph.D. of Missouri University of Science and Technology.
Click here to buy Crusoe, Castaways and Shipwrecks in the Perilous Age of Sail now!