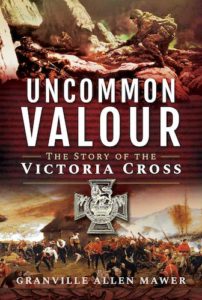 The Crimean War Battle of Inkerman, fought November 5, 1854, took place in such foggy obscurity that it was won by the initiative of soldiers and noncoms in relatively small units, and came to be called “The Soldiers’ Battle.” But while officers could be (and were) rewarded by field promotions and knightly orders, no such recognition was available to the enlisted ranks. To meet this need, Queen Victoria instituted her eponymous Cross, to be awarded without regard to rank of the recipient.

Though the suggestion came from others, the queen and Prince Albert immediately took a deep personal interest in the design and criteria for awarding the Victoria Cross. A bronze Maltese cross with a crown, a lion, and the motto “For Valour,” hung from a plain red or blue ribbon, was to be Britain’s highest military honor. The material was deliberately inexpensive, though Victoria chose bronze over the suggested copper, as resulting in a more attractive patina and better wear.

The queen also changed the suggested motto “For the Brave” to “For Valour” to avoid any sense that of her soldiers only those given the Cross were brave. For this reviewer, Mawer’s great strength is his attention to the nuances of the sort involved in Victoria’s thought. Thus he considers the shifting attitudes—political, personal and philosophical—that in the course of a century and a half have influenced the selection of awardees. By the 1856 Warrant that established the Cross, the medal is to be given “to those who have served Us in the presence of the enemy, and shall have then performed some signal act of valour or devotion to their Country.” That seems pretty clear, but in practice, some important questions arise. For example, what is the distinction between valor and courage? As the award (with a pension) is given to individuals, not units, what if an entire unit has shown equal valor? What if a recipient is discovered to have also done something criminal?  Should spontaneous acts of valor be valued differently than deliberate ones? Does it matter whether and how much the valorous act actually benefits the state?

Where a more pedestrian author might have taken us through a chronological survey of awards given from the Crimea to Afghanistan, Mawer devotes his attention in separate chapters to such questions. Drawing upon Homer, Aristotle, and Pope Gregory, along with Churchill, Tennyson and other less ancient thinkers, Mawer illustrates the point of each chapter with vivid vignettes. Brave men briefly cross the page, some awarded the medal and some not. Mawer dissects the thinking of those involved in the decision. He freely includes his own opinion on why the choice was or was not correct. For example, consider the posthumous VC given a battalion commander in the Falklands campaign who charged ahead of his men into an obviously deadly situation. Mawer remarks that this was “an object lesson in what not to do. It was his job to direct the battalion, not lead a section.” On the other hand, many men in other conflicts almost certainly deserved a Cross they did not get. For one thing, though the Warrant does not so specify, for half a century anyone who died during his valorous act was ineligible—posthumous awards were not permitted.

The American reader inevitably compares the Victoria Cross to our own Medal of Honor, created only a few years later during our Civil War. There are interesting differences. While the MOH cannot be legally sold, one VC was recently sold for over a million pounds. While both are given to individuals, not units, one often hears recipients of the MOH say they wear their medal to honor their comrades. The VC on the other hand, has at times actually been given to individuals elected by the members of their unit.

For appendixes, besides the 1856 Warrant, Mawer provides a table of the 1,363 VCs given up to 2013, with specifics of who, where, when and why. He also adds the text of the delightfully funny poem “How I Won the VC,” by an anonymous Australian participant in the WWI Gallipoli Expedition. Readers should be warned that any attempt to use the otherwise good index to find a name in the table of recipients will fail, as those page numbers are completely off. Also, a reader who wants to see an image of the medal itself must hope the dust jacket is present, or else resort to google.

Such matters should not unduly discourage a prospective reader. Mawer has given us a very fine piece of work, a thoughtful but lively essay on what such an award is really all about. It should appeal to anyone interested in military values. Chapters perhaps, if not the whole book, might serve well as texts in military leadership classes at the U.S. Naval Academy or elsewhere. The armchair historian will find it a pleasure.