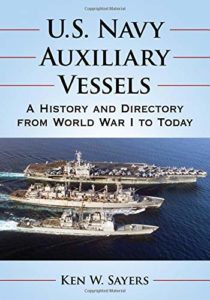 Sayers, a former USN officer on a Pacific Fleet destroyer and later at the Pentagon along with working for IBM, crafted a nearly 400-page homage to the US Navy across not only time but also the plethora of support vessels that have made the USN capable across the World Wars, the Cold War and even into the recent operations against Iraq and elsewhere.

This timely and robust tome is divided into three major sections: “Combat Logistics and Fleet Support Ships,” “Support Ships” and a “Directory of Inactive U.S. Navy Auxiliary Ships,” with supporting introduction, glossary, bibliography, and index, etc. While the first two sections concern existing hull types, the third and much larger section deals with over 3,000 vessels which served the Navy’s needs at one time or another since about 1917, although such vessels go back much earlier.

The first section, “Combat Logistics and Fleet Support Ships,” discusses the main vessels used to support the US Navy in alphabetical order of the abbreviation used, beginning with the “Afloat Forward Staging Base” (AFSB) and ending with the “Command Ships” (LCC).  As an example of this section, one vessel warrants discussion: the USS Canopus (AS-9). Sayers follows a pattern of offering “select histories” as a way to discuss certain examples of the various ship classes without being able to offer comments on every single vessel. In this instance, he offers a glimpse at the career of the overlooked but critical USS Canopus which served the Asiatic Fleet during World War II and once the main fleet units departed for the Dutch East Indies or elsewhere, acted as a sort of one-ship navy with regard to its efforts supporting the Bataan Peninsula. Not content to merely support submarines, the tender Canopus serviced equipment, fabricated tripods and other materials for Army units ashore in addition to providing sailors to fight as ad hoc infantry in the improvised Naval Battalion which helped to eliminate Japanese troops that landed behind American lines at Longoskawayan Point, near Mariveles. [92-93]

The second chapter, “Support Ships” discusses the non-combat vessels used to support the US Navy in alphabetical order of the abbreviation used, beginning with the “Crane Ships” (T-ACS) and ending with the “Relic/Museum Ship.” As an example of this section, two vessels warrant brief discussion: the USS Constitution and the USS Repose (AH-16). The USS Constitution, which requires no explanation as a precious Relic/Museum Ship, remains the oldest commissioned US Navy vessel afloat, and continues to thrill guests as “America’s Ship of State” since 2009. [212-213] USS Repose (AH-16) began service in 1945 as a hospital ship, eventually serving in the Korean and Vietnam Wars. While assigned to South Vietnam’s I Corps Tactical Zone Repose provided medical care to thousands of grateful wounded. [172-174]

The third chapter, “Directory of Inactive U.S. Navy Auxiliary Ships” records the vast number of ships from deleted hull designations, beginning with the “Crane Ship” (AB) and ending with the “Ocean Radar Station Ships” (YAGR). This chapter has over 3,000 ships and does a fine job of providing a basic discussion for each and some insights as to how they were used and then they ended service, etc. As an example of this section, one particularly unlucky vessel warrants discussion: the USS Pueblo (AGER-2). The strange story of the USS Pueblo’s subsequent capture by North Korea in January 1968 stands out as one of the significant events in the turbulent Cold War history of the United States. While the crew did gain eventual release, the old spy ship allegedly remains a tourist attraction in Kim Jong Un’s isolated “hermit kingdom.” [239]

U.S. Navy Auxiliary Vessels: A History and Directory from World War I to Today deserves a prominent place on the shelves of all naval enthusiasts. With such a wide range of vessels discussed from transport, salvage, rescue, aviation and tankers to tugs represented in this authoritative and efficient monograph, Sayers provides the proverbial money’s worth. It is at once a time capsule and a sturdy reference for naval research while also a thorough cataloging of the evolution of the US Navy’s needs over time from coal-fired to modern propulsion along with the technology accompanying such advancements. Exhausting research and thorough documentation let the reader know even the most obscure ship types which served the Navy’s logistics and support needs over the last century reside under one thick volume that does not disappoint.