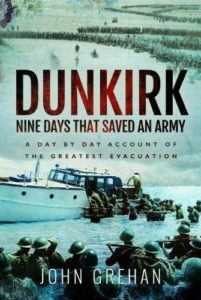 Dunkirk – the port city of northern France calls to mind many different images and descriptions from the Second World War, e.g., the greatest evacuation of all time, a miracle, a methodical retreat, a tactical disaster, an allied defeat, and on and on. It was an exceptional withdrawal from an untenable battle front, and a German opportunity thwarted. Hitler viewed it as a victory. However it is viewed, the allied evacuation of the British Expeditionary Force (BEF) from the harbor and surrounding beaches of Dunkirk make it a prodigious accomplishment that at any time during its execution could have completely failed had circumstances changed only slightly.

John Grehan, an experienced author with more than 300 book and magazine contributions, steps us through each day of the evacuation in his engrossing and methodically detailed Dunkirk: Nine Days that Saved an Army. Grehan begins by giving a credible, brief summary of the events leading to the evacuation, enough to set the stage without becoming too mired in unnecessary political and battlefield detail. On May 10, 1940, the Germans invaded Belgium, the beginning of the blitzkrieg which would within a matter of days leave France suffering its greatest defeat and leaving the BEF to face “the prospect of disaster on an unimaginable scale.” Churchill, newly appointed prime minister, visited Paris to directly discuss with the French government and military leaders how they might consolidate their badly separated forces and counterattack against the German juggernaut. General Viscount Gort, Commander-in-Chief of the BEF, was tasked with concentrating the BEF in order to maintain its cohesion and ensure its continued effectiveness as a fighting force. However, by May 19, Gort and the British government realized that, in the face of an ongoing German advance and the increasing separation and possibility of defeat of the main bodies of the French army, the only alternative was the removal of the BEF from France. To do so necessitated leaving behind virtually all their arms, artillery, vehicles and ammunition. Gort looked to Dunkirk as the most feasible point of embarkation. It was also necessary to hold Boulogne and Calais as long as possible, making use of their port facilities to begin the evacuation of the BEF, now named Operation Dynamo, which began on Sunday, May 26.  Boulogne and Calais could not hold long and were soon lost. The evacuation would continue at Dunkirk alone.

The canvas on which Grehan paints Dunkirk is multi-dimensional. There is the port of Dunkirk itself, under continual attack from the air by the Luftwaffe. The most common observation of Dunkirk is the cloud of thick smoke hovering continually over the city as a result of burning port facilities. This is the first thing that those approaching the city via the English Channel consistently remark upon. There is the Mole, the jetty at the eastern approaches to the harbor which plays such a critical role in the evacuation. There are the beaches to the east and west of Dunkirk, resort areas in better times, but now areas of massive troop consolidations and evacuation queues. All of these are protected by the continually shrinking allied defensive perimeter, the maintenance of which made the evacuation of so many possible.

In addition, there is the almost continuous battle in the air. Grehan gives the air war its due. This aspect of the evacuation is often overlooked or minimized, to the detriment of the outstanding efforts of the Royal Air Force. Grehan correctly dispels the myth that the RAF “failed to give the troops on the beaches the protection they expected from the attacks of the Luftwaffe.” Troops were asking, “Where are our aeroplanes?” As Grehan describes, these battles were ongoing, often high above the clouds or behind enemy lines, interdicting fighters and bombers before they reached the beaches. As such, they were often not seen by those on the ground. Air Chief Marshall Hugh Dowding, to save his planes, had earlier defied Churchill, refusing to base additional air squadrons in France as the situation worsened.  Dowding, knowing that he had a finite number of planes of all types, including the excellent Spitfires and Hurricanes, marshalled his squadrons in England, sending them to fly on a continual basis over the continent in support of the evacuation.  Grehan cites statistics that demonstrate that the RAF inflicted severe damage upon the Luftwaffe, preventing the allies from suffering worse casualties than they did.  A companion book dealing with the RAF and the Battle of Britain is Michael Korda’s With Wings Like Eagles: A History of the Battle of Britain (Harper Perennial, 2010) which describes in great detail the buildup of the Royal Air Force in the inter-war years and its participation in the Dunkirk evacuation.

Grehan skillfully paints each stage of the evacuation. He gives us insight into how the commanders in England and on the ground at Dunkirk determined how the evacuation would take place. Various means were attempted and then either discarded or quickly modified as the situation changed. For example, in its initial days the evacuation depended upon the destroyers, destroyer escorts, and other smaller vessels of the Royal Navy, as well as passenger ferries that were pressed into service. These ships, even those with comparatively light draft, could not approach near to the beach for fear of grounding. Therefore, the evacuations from the beaches had to rely on small boats ferrying men from the beach to the larger ships. When this proved untenable for evacuating hundreds of thousands of persons, the east Mole, or narrow jetty at Dunkirk harbor became the primary means of embarkation, where ships could tie up and embark the troops directly. To enhance the evacuation of troops from the beaches, the army drive vehicles end to end into the surf as far as they could, establishing narrow, makeshift jetties over which troops could reach lighter draft vessels or small boats. A good account of how the Royal Navy destroyers supported the evacuation is A Hard Fought Ship: The Story of HMS Venomous by Robert J. Moore and John A. Rodgaard (Holywell House, 2017).

After several days, the need for as many small vessels as possible became apparent and the famous order was issued for as many small vessels as possible to be made available.  Once in use they had their own set of problems. Often the small boats would approach the beaches as far as they could, taking on men who waded out to them. This sometimes caused the boats, even with the weight of only a few persons, to become stuck. They would then wait until the tide rose and floated them off, provided they weren’t strafed and sunk. The “little ships” were swamped if the load became too great. However, while the larger ships evacuated the bulk of the BEF, the little ships bravely did their part against all odds and became the stuff of legend.

Vessels large and small made continual trips back and forth across the channel to Dunkirk from ports such as Dover, Ramsgate, and Margate. The stream of vessels was continuous, both night and day, despite constant enemy artillery shelling, bombing and strafing, and attacks by the German navy. Crews became exhausted and had to be replaced.  There were significant allied casualties in killed, wounded, and captured. Many allied ships large and small were sunk with great loss of life, often becoming serious obstacles to navigation. A total of 338,682 persons were evacuated by day 9, with a high on May 31 of 64,141 saved. At 2300 hours on June 2 Captain William G. Tennent RN, chief staff officer to the First Sea Lord, sent to Dover the following message, elegant in its simplicity: “B.E.F. evacuated. Returning now.”

Grehan continually weaves eyewitness accounts throughout his narrative of the evacuation. These are not gratuitous inclusions but are carefully chosen excerpts, placed to give significant depth to the story from those in government, in command, and from the common soldiers and sailors. Through such accounts, we feel the struggles of high command in the face of an epic battle. We feel the immense frustration and fear of the soldiers, who are queued up on the beach or on the Mole, and the sailors and evacuees aboard the ships and boats. They are hungry, thirsty, and at the mercy of the Luftwaffe or German torpedo boats and submarines. Embarkation on a ship was no guarantee of safety.

John Grehan’s account of the epic evacuation at Dunkirk expertly draws the reader into the smoke and fire of battle as the ships and men struggle together to return to England.  His style is easy and straightforward. The book is well laid out, each chapter building expertly upon its predecessors. Grehan includes several functional maps in the front of the book. However, additional maps throughout the text would have been extremely helpful.  Grehan often discusses the tenuous defense perimeter around the Dunkirk area that grew inexorably smaller. Maps indicating the extent of this perimeter each day would have been very helpful in understanding the shrinking window of evacuation opportunity. Another helpful item would have been a short summary at the end of each day’s chapter, showing the number of evacuated that day, total evacuated, and perhaps a loss summary up to that point.  Appendix V does show some of this information, but its consistent inclusion within the text would have been welcome.

This is an excellent, detailed, and thoroughly engrossing narrative of the Dunkirk evacuation. Those who have read Walter Lord’s classic The Miracle of Dunkirk: The True Story of Operation Dynamo­ (Viking, 1982) will appreciate Grehan’s addition to the Dunkirk literature.

Dunkirk: Nine Days that Saved an Army, A Day by Day Account of the Greatest Evacuation
By John Grehan, Frontline Books, Barnsley, UK, (2018).