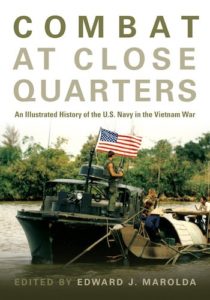 This well-written and superbly illustrated collection of four essays provides an easy to read and understand explanation of the U.S. Navy’s role in the Vietnam War. Four chapters focusing on the Rolling Thunder campaign, warfare on the rivers and canals, naval power in Southeast Asia, and naval intelligence in Southeast Asia provide readers with an appreciation of the difficulties of the Vietnam War, as well as glimpse into the heroism of those who fought there.

While many readers are aware of the Navy’s sea and air actions during the conflict, the chapter on Naval Intelligence in Southeast Asia provided a thorough look at the difficulties and nuances of gathering information to understand the enemy and deciding what strategies to employ during the conflict. In particular, the role of the communications and electronics analysts, SEAL, and NILO intelligence gatherers gave a much-welcomed look into operations conducted by the Navy. The difficulties the Navy had with those in Washington, D.C., who only experienced the conflict from the White House, seemed to interfere with the missions that the Navy and its Air Force and Army partners tried to carry out. The authors do not question why the United States entered the conflict and explain that the authorities in the government told the Navy where they could or could not conduct their missions, often, it would appear, to the detriment of various missions. The authors note that being unable to bomb areas in and around Hanoi or just north of the DMZ permitted the North Vietnamese to bring men, weapons, and supplies into South Vietnam, while the Navy was unable to secure these areas because of decisions made far from the scene of war. Further, the authors comment that President Lyndon B. Johnson’s fear of the Soviet Union and the People’s Republic of China and their potential interference in the conflict prevented the Navy from eliminating threats to South Vietnam.

The volume describes the Navy’s vessels, such as Shangri-La (CVS 28), weapons, such as Talos surface-to-air missiles, and missions in a manner easily understood by all. The illustrations, both paintings and photographs, show the personal as well as the military side of the conflict. They are a much-welcomed addition to the work. Stories of the contribution of the men and women, officers and enlisted, make the book far more than a story of war with only bombs and bullets; it is a story of heroism.

For those who have little knowledge of the Vietnam War, this is a welcome volume that provides much needed information unavailable elsewhere in an easy to read style. Further, Combat at Close Quarters provides a look into the ways 21st century wars are fought by the U.S. Navy. This work is definitely worth reading.

Reviewed by Diana L. Ahmad, Ph.D. of Missouri University of Science and Technology.
Click here to buy Combat at Close Quarters: An Illustrated History of the U.S. Navy in the Vietnam War now!