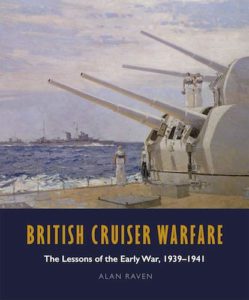 Alan Raven builds on his previous work on British battleships and cruisers to analyze the experience of British cruisers as a weapon system in the Second World War.[1] He emphasizes the operational and tactical employment of cruisers and focuses on the early war years since “most of the significant lessons of the naval fighting were learnt early on.” (7)

The book has a unique structure. He begins with a chronology of cruisers operations from September 1939 to December 1941 which runs to just under 140 pages. The chronological approach highlights how cruisers were employed simultaneously in various theaters, especially after Italy entered the war in June 1940. Some of entries are very brief while others (such as the Bismarck episode) run to several pages and include analysis of cruiser performance. For late 1940 and 1941 the emphasis is on the Mediterranean and repeated engagements with the Italian navy and Axis air power. A theme throughout the chronology is the growing danger posed by aircraft to cruisers and the difficulties of effectively countering air attack. Anti-aircraft crews tended to fire too much ammunition in early engagements and required competent direction to ensure that all attacking aircraft were engaged. The emphasis was on disrupting air attacks by firing on attacking planes to prevent them from making unimpeded attack runs.

The second half of the book consists of 30 topical summaries of various aspects of cruiser warfare. Each summary runs several pages in length and emphasis a particular theme, drawing from the chronology as appropriate. The summaries begin with combat-oriented themes (anti-aircraft tactics, surface gunnery) before turning to intelligence (codes, radio-direction finding) and finally a comparison of British, German, and Italian cruisers. Two particularly interesting summaries on repairs and weather damage highlight the impact of wartime operations. Forced to operate in dangerous weather conditions such as the Arctic Ocean for extended periods, British cruisers regularly suffered weather damage which in turn required shipyard resources to repair. Convoys to Russia were therefore unpopular with the Admiralty, not only because of the threat of German interdiction, but also because most of the escort for such a convoy could come back damaged and be forced out of action for weeks.

Raven relies heavily on primary sources from the National Archives though he does not provide footnotes in the chronology and summaries. The level of detail is appropriate for specialists but may be a bit much for general readers.

[1] The views expressed in this academic research paper are those of the author and do not reflect the official policy or position of the U.S. government, the Department of Defense, or Air War College.