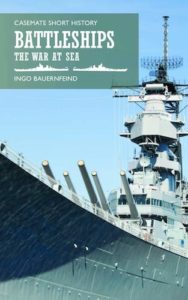 This 8 by 5-inch paperback book is part of the Casemate Short History series. The book traces the rise and decline of the big gun armored warships from USS Monitor to USS Missouri. The period covered by the author is 1862, the battle between USS Monitor and CSS Virginia, to 1992, with the decommissioning of USS Missouri, the last operational battleship. The book appears to have been written as an introduction to the topic of battleships and their place in naval history. For over 100 years, when visualizing a navy ship, the general public pictured a battleship as the epitome of what a powerful navy ship should look like. The battleship was therefore viewed by naval officers, politicians, and the general public as the embodiment of a nation’s ability to fight and win a naval war. In fact, during the 1920s and 1930s, the battleship was viewed as a weapon that emboldened nations to go to war and thus peace could be insured by outlawing these ships or by limiting their number, size, and armament.

The author starts his book with a brief overview at the progression of big gun warship design from wooden ship of-the-line to the pre-Dreadnaught battleship to the Dreadnaught battleship and battle cruiser. The heart of the book is an examination of the events that drove navies to abandon wooden ships for iron and then steel. The story is told via a timeline in which the iron hulled battleship develops from a coal burning reciprocating engine powered ship having an armored belt and carrying guns of all sizes, which were sighted and fired by their gun crews, to the steel hull oil burning turbine powered ship carrying both deck and side armor and mounting a main gun armament of one size and caliber that were sighted and fired from a central location.

The book is divided into five sections: pre-World War I, World War I, the interwar years, World War II, and post-World War II. Within each of these periods, the author examines advancements battleships received in propulsion plants, fuel, armor, main and secondary guns, communication, underwater protection, anti-aircraft weaponry, and fire control. Also discussed is the concept of the battle cruiser and the part these ships played in the development of naval tactics.

The book’s narration is not limited to the battleships of the major navies, but includes those of Austria-Hungary, Brazil, China, and the Ottoman Empire. The notable naval battles and ship-to-ship engagements the battleships participated in are outlined: Sino-Japanese War, Spanish-American War, Russo-Japanese War, World War I, Spanish Civil War, World War II, Korea, Suez Canal Crisis, Vietnam, and the Gulf War. The author presents a nice overview of the inter war naval limitation treaties and the friction that developed during this period between the supporters of air power and those who saw a continuing need for battleships.

The book’s text is supported by photos of various battleships and drawings of their internal workings. The audience for this book is not the knowledgeable naval historian but rather the budding naval historian. Within the limits of the book’s size, the author has crafted an excellent introduction to the history of the battleship.