This massive book is obviously a labor of love on the part of the author. Much of it is formatted like a scrapbook, covering almost thirty years of naval history. The book covers: 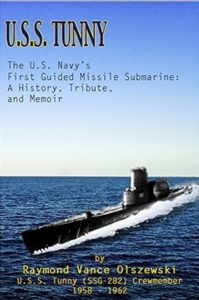 This book has a unique way of explaining the history of the boat, with anecdotes or sidebar information that give insights into the actions and personalities of many of those who served on Tunny when it was an SSG and an APSS. By the time Ray started on the book most of the World War II crew had, as submariners say, gone on their “Eternal Patrol,” so the World War II portion of the book is less able to offer particular insights that reveal the “personality” of the crew. Where possible, Ray has inserted details on many of the officers and enlisted, including anecdotes regarding some specific situations. Some of these involve pranks or unusual actions on the part of the crew.

As a former yeoman, the author was able to access the personnel records of the Tunny throughout its career, and to identify which patrols the various crewmembers participated in. He was also able to include information on every one of the hundreds of submariners who served on Tunny throughout its distinguished career.

The book is a bit overwhelming in its size but is well worth taking the time to go through. It’s almost 700 pages long, and the page size is almost twice the size of a typical hardcover book, making this the equivalent of over a thousand “normal” pages. The author was able to include photos and images of various memorabilia, which helps to break up the text and make it more readable.

The main value of the book is to bring a realistic view of what was entailed in the missile patrols and, later, the UDT/SEAL operations. To my knowledge, no other book offers these insights. It’s one thing to make a long patrol on an SSBN, but something else altogether doing it on a diesel boat that must regularly snorkel or surface, and, in the case of the SSG, operating in one of the most difficult weather areas in the world’s oceans.

So far as the discussion of the APSS/LPSS era goes, I should mention that I served on Tunny from January 1967 to November 1968, as Weapons Officer and as Engineering Officer on her, and can testify that the author portrayed our operations quite accurately.

The primary readers of this will be those who actually served on Tunny, which is what I believe the author intended. I think it will also be a valuable resource for those who want some unusual insights into diesel submarine operations.

Reviewed by Capt. Gerry A. Young, USNR (Ret.). Captain Young is the author of the novel: Deep Secrets, a Cold War Thriller combining some submarine topics and Soviet spies available online from Amazon as an ebook or in print version. Commissioned into the Navy through the Oregon State NROTC program, Young spent five years of active duty on submarines and then joined the Navy Reserve to eventually command two reserve units. As a civilian, he worked mainly in the financial and corporate planning areas, primarily in telecommunication companies.