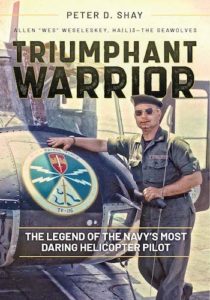 Peter D. Shay’s outstanding freshman effort is both a personal and institutional history of a small tactical Navy helicopter unit in Vietnam, HA(L)-3 “Seawolves,” that reads fast and furious, but not without a penchant for details. The story is an exciting for read for any aviation enthusiast or military historian. The Navy’s only “brown water” light attack squadron during Vietnam is little known outside the squadron passageways of the Navy’s HSC and HSM commands. Shay, himself a former HA(L)-3 pilot during the war, shares the incredible story of Allen “Wes” Weseleskey and his daring rescue mission of U.S. Army Rangers at Cao Lahn on March 9, 1968. The book traces Weseleskey’s career in biographical fashion, introducing him as an adolescent and continues to chronicle relevant career milestones into the twenty-first century. The bulk of the book’s material hovers around Weseleskey and HA(L)-3’s operations in 1967-68, which have been glossed over in most published Vietnam “battle” histories.

The text is ripe with intimate details on dozens of characters, as the core material is drawn from sixty-plus author interviews, monographs, and oral histories. Shay adds another layer to the manuscript with significant secondary source material, providing a strategic and operational background for the isolated action of Weseleskey’s detachments. The strength of this book is in the vivid details of the missions, attacks, and their outcomes, even in the midst of tragedy, Shay’s retelling of the attack on Vinh Long Airfield on the opening night of the Tet Offensive grips the reader from start to finish. Through the personal accounts of dozens of the individuals who were there, Shay spares no details, harrowing or heroic. Likewise, the Cao Lahn mission, Weseleskey’s most valiant action as a HA(L)-3 pilot, is a classic page-turning, adrenaline-charged account of courage and valor.

Perfection notwithstanding, there are moments throughout the book where the plot tends to stray and the text gets caught up in more of institutional details of the unit, leaving the reader wondering when the plot will resume its connection to the book’s title and namesake, Weseleskey. Shay’s description of the numerous maintenance troubles, aircraft mishaps, and administrative confusion within the earliest HA(L)-3 operations, while germane to the institutional history, could be a distraction for many readers, unless they are familiar with the nuances of naval helicopter aviation maintenance and operations. To those who have served in or around a helicopter squadron, much of the technical terms and jargon will be familiar. Yet, for most readers, the included-glossary will be a welcomed companion.

As a former HA(L)-3 pilot and squadron mate of Weseleskey, it is apparent that Peter Shay places all his heart into this book. It is a labor of love and the writing shows as such. His language is that of a Navy helicopter pilot and one who has the utmost respect for the individuals out in front and working behind the scenes. His attention to detail, specifically where he includes the untold stories of crew-chiefs, door gunners and enlisted maintainers is what makes this book stand out. Yes, the story was written to celebrate the life and career of an outstanding Navy helicopter pilot, but to Shay’s credit, he does his best to make it more than that, honoring so many who sacrificed so much.

Reviewed by Cdr. Stan Fisher, Ph.D. Commander Fisher received his doctorate from the University of Maryland and is a member of the U.S. Naval Academy History Department faculty.

Click here to buy Triumphant Warrior: The Legend of the Navy’s Most Daring Helicopter Pilot now!