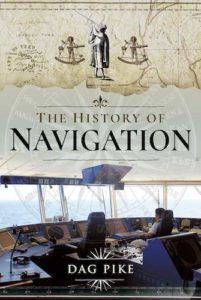 Anybody that needs to move themselves or some object, are required by nature to navigate to some degree. The early true history of navigation, however, is conjecture at best. Since navigation gives the appearance of an inherent trait to humans, we tend to take it for granted as it is just something they do. As humans have always resided on solid ground; the use of general direction and obstacles as waypoints have always been used to get to a target destination. Which is simply a point-to-point system of directions, over time it usually develops and expands to include such factors as timing and a measured distance. As natural navigators in the “land” environment which is made up of relatively solid and stable objects of all sizes and shapes, we select them as waypoints to help us on our journey. Immovable objects tend to work best and determine the direction one must go toward the eventual target. Though the general direction remains relatively the same intermediate directions vary. Without waypoints however, navigation becomes very difficult as humans tend to be visual, even folks that are blind in their mind’s eye use waypoints to navigate using feel, smells, sounds and counting steps to determine distance and direction to a destination.

It was not until humans began venturing to the seas that the interesting history of navigation began. The venture off solid ground and channeled waterways to the open sea took special people to meet the challenges of the unknown. Fear and superstition for centuries kept navigators in site of land using landmarks as waypoints to navigate. Trying to select points where supplies could be acquired as waypoints. As the mysteries of nature began to reveal themselves the ocean seemed less of a threat and mariners began to venture farther out past the known horizon. As astronomy improved it revealed that the stars were relatively stable or at least predictable. Mariners began to see the advantages of using astronomy to create waypoints in the open sea and adapted astronomical instruments to work on moving ships. As they ventured farther out into the open ocean exploration was not as scary knowing they can find a way back home. Systems of latitudinal lines developed, the eventual realization and acceptance that the earth was round added longitude making a grid for the Earth. As mariners began to use logbooks and journals to describe their adventures charting also matured. Recording natural phenomenon such as prevailing winds, currents, bottom soundings and even weather patterns began shrinking the world. Today the art of charting has matured to where there is little room for improvement.

Technology, however, is improving with leaps and bounds. Modern instrumentation makes it much easier and safer to get around. Satellite Geo-Positioning-Systems can be carried with you everywhere, waypoints are in your pocket on land, at sea and in the air. These systems are however, vulnerable to failure making improved backup systems such as eLoran and the like a necessity. Another issue is collisions, you would think with the technologies of today that collisions would never occur. However, most collision avoidance systems are dependent on the combination radar detection and humans, leaving human error in the equation. Eventually humans will have to swallow their pride and be taken out of the equation. We’ll see!

As usual I read the book twice, once for the feel and enjoyment and once for the technical aspects. The author appears well versed in the history of navigation; he uses his fifty years’ experience to verify the aspects of navigation. The book reads well, is concise, maintains the interest of the reader and includes just enough personal touch to “not” make you feel that it is an autobiography. Illustrations are well placed and useful. It is worth reading just for the curiosity if not for the abundance of useful information on the subject. Knowing the evolution of an artform that is based on science helps practitioners move it closer to perfection. Other books I have read on the subject were too fluffy this one tells you something and moves on. I just started reading it again, for me.

Reviewed by Michael F. Solecki. Solecki is an independent naval historian, holds undergraduate degrees in engineering and earth sciences and a Master of Arts degree in Military History from Norwich University, a veteran of the U.S. Navy and NOAA and a retired civilian Enforcement Officer for the U.S. Government. In addition, he is often called upon by publishers of U.S. and Japanese naval history to perform pre-publication technical peer reviews.

Click here to buy The History of Navigation now!