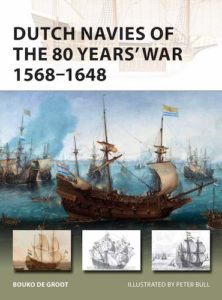 Bouko de Groot’s Dutch Navies of the 80 Years War, 1568-1648 provides a thoughtful exploration into a lesser-known historical period, with insights into the critical years of formative Dutch history culminating in the breakaway from Spain and creation of the subsequent United Provinces of the Netherlands. As the title suggests, this work focuses on the naval aspects of the war and provides a range of useful images to provide the reader with a real sense of the vessels employed by the Dutch in their struggle with their Spanish overlords.

De Groot has authored several books for Osprey related to the 80 Years War covering land and sea combat such as Dutch Armies of the 80 Years’ War 1568-1648 (1) Infantry (Men at Arms #510) and Dutch Armies of the 80 Years’ War 1568-1648 (2) Calvary, Artillery & Engineers (Men at Arms #513); with Nieuwpoort 1600: the First Modern Battle (Campaign #334) his most recent. De Groot divides the 48-page book into four main sections: “Civil War 1568-87,” “War for Independence 1588-1620,” “Coalition War 1621-48,” “On the Fringes” all but the latter with the four subareas of organization, ships, aboard and in action. The main sections are supported by an introduction, chronology, further reading, conclusion, and index. The chronology, in particular, is a critical reference, allowing the reader to track the many battles and other developments over eight decades ranging all over the world and culminating in the 1648 Peace of Münster. [6-7]

De Groot begins with “Civil War 1568-87” where he sets the tone of providing a brief but useful explanation for those unfamiliar with the topic, in this case the challenges the Dutch faced religious and economic repression, which spurred on their rebellion instead of acquiescence. Spanish heavy-handed tactics such as crippling taxation, banishment and execution of rivals presaged their eventual defeat. Ship’s guns were often too weak to do serious damage in the era and many ships were relatively small, this trend changed with time as the guns grew more powerful. The large blood flag, used to signal that “violence was about to happen,” was flown from the stern as a clear indication to nearby vessels. Hostile boarders played an important role in naval battles and due to the ferocity and close-range battle, it was “akin to trench and tunnel warfare.” [13]

“War for Independence 1588-1620” addresses the long fight with the Spanish masters, in which Maurice of Nassau “reformed the army and revolutionized land warfare” [16] among other achievements. It also involved a number of independent provinces such as Holland and Zeeland, instead of a clear line of command the provinces provided their own leadership, vessels and personnel. This period saw the creation of the United East India Company (Verenigde Oostindische Compagnie or VOC), tasked with controlling the Asia trade lost to rivals through a large naval presence with powerful, if not often slow, vessels. [16-22]

“Coalition War 1621-48” delves into the period where the Dutch cooperated with the English to thwart Spanish plans. Now, with fewer naval assets the Dutch acted defensively in lieu of previous more offensive action, putting far more emphasis on privatization of the more distant water efforts in the capable hands of privateers, the aforementioned VOC and the new West Indies Company (West-Indische Compagnie or WIC) who collectively sought to pick away at the Spanish and Portuguese imperial possessions or claims. [28]

“On the Fringes” sketches the amphibious warfare of the 80 Years War in addition to “atypical designs” of warships encountered in the same period. [43] He profiles the ambitious landings in Flanders by Maurice of Nassau, the largest successful amphibious invasion before 1900, which put over 12,000 men and associated equipment ashore; presaging the much larger landings of the World Wars. [41-42] The Dutch conducted extensive amphibious and riverine warfare not only at home but abroad, such as in the East Indies, Brazil, Peru and Angola. Among the innovations were so-called “burners” (incendiary vessels), “bursters” (vessels meant to explode) along with floating mines and crude ironclad vessels. [43-44]

Bouko de Groot’s Dutch Navies of the 80 Years War, 1568-1648 offers a valuable glimpse into the warships, tactics and relevant details associated with the oft-overlooked period leading up to Dutch independence from Spain. Besides the overview of the war at sea and vibrant supporting images, the book also provides an interesting look at the many overseas fights featuring Dutch interests such as in the former East Indies (modern Indonesia) and Brazil. In particular, the book outlines the Dutch use of merchant ships as improvised warships in a seaborne insurgency against the monolithic Spanish, the role of “sea-beggars” [8] as important pirates in the same insurgency and the difficulties involved with civilian government regarding corruption, etc. In this retelling of the David vs. Goliath story, the smaller Dutch forces triumph and gain their own country after a long, difficult conflict. While the topic may be unfamiliar to some readers it belongs on the shelves of those who enjoy an underdog story as much as fans of the Age of Sail or general naval enthusiasts.