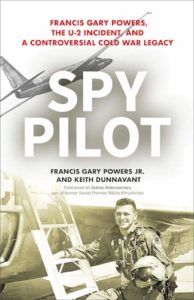 No name is more synonymous with the Cold War battle for intelligence between the United States and the Soviet Union than Frances Gary Powers. The May 1960 shoot down of a U-2 over the Soviet Union removed the veil of secrecy of the airplane’s existence and chilled already frosty relations between geopolitical competitors. The pilot’s capture, interrogation, trial, imprisonment, and political fallout influence American reconnaissance and intelligence gathering to this day.  Powers returned home after a prisoner exchange dramatized in the 2015 Steven Spielberg film Bridge of Spies to find himself and his service under a cloud of suspicion. Despite efforts to clarify his record, Powers’ name and legacy remained controversial until his untimely death in a news helicopter crash in 1977.  Years later, his namesake son picks up the mantle of clarifying his father’s story and rebuking many enduring misperceptions of his actions during a tense superpower standoff.

Spy Pilot is more than a biography of Frances Gary Powers.  Rather it is the story of a family and their struggle with book’s eponym moniker.  Born from humble roots in a small coalmining town in Southwestern Virginia, a young boy takes his first flight at a county fair. Later, enlisting in the U.S. Air Force as the Korean War broke out, Powers progresses through Aviation Cadet training to become a fighter pilot.  His success there will lead to events many believe were his failings in the competition that was the Cold War.  Did he allow himself to be shot down?  Should he have killed himself with a poison-tipped pin hidden in his flight gear?  Did he betray the United States under interrogation?  Those questions lingered in the national memory of the “U-2 incident” about Powers even after his death.

Told in an intriguing manner with parallel story lines liken a Cold War novel, the first 100 pages of the book is a quick read.  It tells the tale of a small town coalminer-turned cobbler, a son inspired by aviation, recruitment into the cloak-and-dagger world of intelligence gathering, shoot down and capture, sensational show trial and conviction. In those same pages the author details an unvarnished view of a family blinded in the glare of the national spotlight, a wife’s struggle with alcohol, and their perceived abandonment by the government.

The second half of the book slows down as a man who lost his father at age 12 begins to feel the weight his name carries.  This begins his journey that is part research into the truth around his father’s legacy and self-discovery.  The two themes eventually join as he pushes the government for missing recognition of his father’s service.  While securing posthumous awards and eventual founding of the Cold War Museum, the narrative suffers with a defensive tone and frequent rebukes of the Powers family.  The lack of formal recognition of the aircraft’s most famous pilot at events such as the unveiling of the article at the Smithsonian Air and Space Museum, or other Cold War commemorations were certainly painful for the family, the tone wears on the reader.

Spy Pilot draws on the first-person stories captured on tape Frances Gary Powers recorded for his autobiography, Operation Overflight coauthored with Curt Gentry (1970, Hold, Rinehart and Winston), without depending on them exclusively.  The author details his quest for truth and includes much of the material he has received through Freedom of Information Act Requests. These new insights and current-day interviews make Spy Pilot a worthwhile read to add to understanding the U-2 incident, and the perspective of an American family on the Cold War.