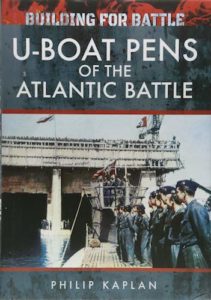 Philip Kaplan is a well-established author with some forty titles spanning aviation, naval and general military subjects such as Wolfpack, Chariots of Fire, Little Friends, Grey Wolves and One Last Look.

In this work, [apparently] the second Kaplan wrote for the “Building for Battle” series from Pen & Sword, he tackles the subject of the massive U-boat pens built in France to service, repair and protect the U-boats of the WWII-era Kriegsmarine. After the 1940 Nazi French conquest the ability to station U-boat bunkers (or U-bunkers) arose using the western coastal cities like St. Nazaire, Lorient and Brest, which could add days to the range of the silent hunters and thereby complicate matters for any Allied attempts to stop the menace of unrestricted submarine warfare which again manifested itself. With the scars of World War I still very real, the chance to base U-boats even closer to the British Isles could not go ignored. Access to the Bay of Biscay would serve the Kriegsmarine well, at least until the Allies managed to mount better air surveillance which took an increasing toll.

The book is one of popular history, with no notes accompanying the text which, however, Kaplan heavily supports by a range of images. Unfortunately, there are no maps, technical drawings or diagrams to delve into the subject. The bibliography includes a number of primary sources, some of which are quoted in the chapters in often-long missives and eyewitness accounts, which lends more credence to the effort. The work therefore serves as an introductory look at U-boat operations in World War II with a range of topics, not merely the titular U-boat pens but also famous U-boat aces, the experience of being on a U-boat, the role of Organization Todt, the struggle to survive Allied countermeasures and more.

Kaplan divides the book into eight chapters: “The Beginning,” “Early Days,” “Type VII,” “Brittany Bases,” “Captains,” “U-Boat Routine,” “Bundles for Britain,” “Under Attack” and “The Last Act” which are supported by 150 photographs, about half of modern facilities from the original WWII construction along with a selection of relevant wartime posters. The modern photographs are some of the more interesting in the book, not only in what they show the French postwar utilization of the pens but also in giving a modern context to the almost 80-year-old bunkers and associated structures.

According to Kaplan, the many U-bunker and associated complexes used about “four million cubic meters of concrete” which does not include all the other vast amount of rebar, sand and supporting materials needed for the projects Organization Todt constructed using forced laborers and German civilians on a vast scale. (p. 17)

One of the reasons so many of the structures survived the war was due to the heavy construction, for example the sub pens might have two roof levels, the lower one made of 3.5 meter thick reinforced concrete which largely ended any hopes of postwar demolition and the upper level “made of concrete beams with one metre space between them.” RAF heavy bombers dropped 12,000 lb. “Tallboy” bombs, which penetrated the upper but not the stronger lower roof at La Pallice and therefore confirmed the value of Organization Todt’s extremely thick reinforcement methods. (pp.19-20)

Among the many quotes in the book is this example from Air Chief Marshall Arthur Harris, reflecting on 1943 air attacks, “The most we could hope to do was cause universal destruction round the [sub] pens and in the town. We could also give U-boat crews on shore a disturbed night…The only effect [the attacks] had was to delay the opening of the Battle of the Ruhr and the main bomber offensive against German by nearly two months.” The bomber attacks did have grave impacts on the local French populace, killing perhaps 600 or more as collateral damage to the raids. (p. 58)

Among other topics, Kaplan discusses three of Admiral Karl Donitz’s “star pupils,” top early war U-boat aces who sank at least 150,000 tons of enemy shipping and earned the Knight’s Cross: Joachim Schepke, Guenther Prien and Otto Kretschmer. (p. 67) While they initially enjoyed great success, such as Prien’s daring 1939 sinking of the aging battleship HMS Royal Oak in Scapa Flow, by 1941 only Kretschmer survived, and then as a British prisoner of war. The British and overall Allied reaction to U-boat successes slowly brought more anti-submarine escorts and aircraft into action, which increasingly safeguarded the vulnerable merchant ships carrying the lifeblood of the British Isles.

Kaplan’s Building for Battle: U-Boat Pens of the Atlantic Battle provides a good overview of not only the massively-built U-boat pens but the overall experience of the intrepid German submariners who faced long odds by 1943 and suffered the highest chance of death by service branch during the war. The supporting images are useful and in the cases of the modern glimpses, a rare chance to see what became of the once mighty structures built to safeguard the Kriegsmarine’s vaunted U-boats and their various modern civilian and military usage.