One of the true joys of returning from sea from a long deployment is to have a loved one join you on a short transit home to see what Dad, Mom, Aunt or Uncle does in the Navy. This post will be co-written by me and the NHF director of Events, Mr. Sam Hall, whose “Dadmiral” is Rear Admiral Garry Hall, USN (Ret.).

A “Tiger” is almost always a family member who is invited by a Sailor to sail with them from the final port of call on a long deployment to homeport. The Navy describes the purpose of a Tiger Cruise officially in the following way:

“The occasional embarkation of family members of naval personnel is
intended to contribute to good morale and instill in servicemembers a
sense of pride in the Navy and their ships. It also enhances public
understanding of the Navy and increases community awareness.”

“Operation Tiger Cruise is the unclassified code name for a very
special guest cruise program that includes two or more consecutive
days underway. The primary purpose of a Tiger Cruise is for
servicemembers to acquaint their family members with their ship and
their shipboard duties.”

Sam Hall will jump in shortly to represent the Tiger perspective, but I wanted to share how great it was to have my step-father join me on four different Tiger cruises aboard the USS Paul F. Foster (DD 964)—twice—and once each on the USS Chancellorsville (CG 62) and USS Shiloh (CG 67).

My step-father Capt. Joseph E. Gould, USN (Ret.), was a USNA grad (class of ’43, but graduated in June of ’42) and was a Diesel submariner (WWII), Surface Warrior (Korea) and Naval Intelligence (Vietnam) officer. He had five afloat commands in his nearly 30-year career and knew a thing or two about my business. As a Navigator, he joined me for shooting morning and evening stars, actually shooting stars and reducing them to determine our position. These are not easy skills to master and imagine my intimidation that he did this 8 years after retirement. He added to my misery, I mean, professional development, when he encouraged me to obtain a 1000 (10 AM) sun line each morning so we could obtain a running fix from a local apparent noon calculation. At lunch in the wardroom, a young Sailor entered and presented to the Captain our twelve o’clock reports… “Sir the Officer of the Deck sends his respects and reports the approaching hour of 1200. All chronometers have been wound and compared and we have position fixes from a sunline/local apparent noon, SATNAV, Loran and Omega.” “Very well”, said Capt. Lee Kaiss. Our Commodore, Capt. John J. Gelke, was a Kings Point mariner of great navigational and engineering accomplishment as well.  Together they were apoplectic that our Nav-team was so accomplished, forward leaning and on top of the game. “Wow, Petty Officer Gallup (the leading Quartermaster) is really raising the bar these days, isn’t he?” opined the Old Man. The Commodore jumped into the conversation and brought the credit where it belonged—to my stepfather. This is when the Commodore metaphorically became my step-dad’s “bestie” and they shot stars together for the final four days of our deployment. My Quartermasters were elated as the small and always nearly empty chart room was jammed with two Captains, a Lieutenant, and the occasional Junior Officer needing some Personnel Qualification Standard signed off in what was supposed to be a chill and retiring ride home in an empty chartroom.

Thank you, Admiral—Sam here. As a young Navy kid, I never really knew that much about my dad’s work. His time on shore duty felt like he was at any other job with long hours a mom or dad might’ve had. My family and I said farewell and welcomed him back many times on different piers and hangars or he’d surprise me and my siblings and break us out of school, but I never really knew what his life was like on the boat. In late July of 1998, my perception of all of that changed as a young Tiger with my older brother, Garry. We met my dad in Pearl Harbor as the USS Tarawa (LHA 1), the Eagle of the Sea, returned from the Arabian Peninsula, Persian Gulf, and different ports of Africa and the Pacific. I was lucky that year—I just made the age cut of 8 years old merely a month before the cruise.

As a kid, one of my favorite memories was meeting Main Propulsion Assistant Lt. Cdr. Ronnie Harris. Lt. Cdr. Harris ran the 5000m with the USA Olympic team and was roommates with “The Admiral” himself, David Robinson, at the Naval Academy. To this day, Ronnie is one of the funniest people I’ve met and would have me, my brother, Dad, and plenty of other Tigers red in the face with laughter. When there was some downtime, my brother, myself, a few other Tigers and LTs would cram in Lieutenant Commander Harris’ quarters and play one of our favorite video games at 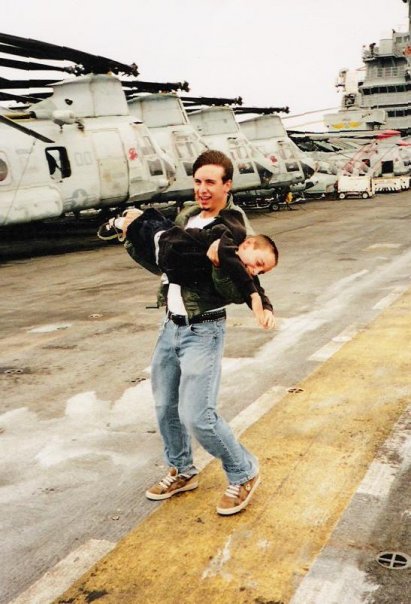 the time, Star Fox 64, on his Nintendo. He showed no mercy for me and my brother—the XO’s kids(!)—and kicked our butts. I would bug him constantly for a rematch. Hanging out with that awesome crew was some of the most fun I had, especially when I could eat my weight in ice cream in their wardroom. Looking back, knowing the quality of people Dad was at sea with would bring a lot of comfort back home.

Twenty-one years later, there’s still so much from that Tiger Cruise that I carry with me. I still feel giddy as I tell friends and colleagues of the rumble and boom of an M242 firing off into the distance with eyes fixed on the glow of tracers turning into splashes. The sound of ocean waves lapping into the immense well deck is still vivid in my mind. As a little guy then, I didn’t shoot much, but being on the Marine’s indoor range might’ve put a little hair on my chest. Whether it was sharing lunch with the crew and other Tigers or watching the awe-inspiring skill and tact of flight ops, I loved being on the flight deck most of all.

In all honesty, being a Navy kid was tough at times. When a parent is on a deployment, it can feel like a lifetime. But being a lucky, young Tiger sailing home with Dad, seeing what he did day-to-day, and meeting the amazing men and women he served with—Those are memories I wouldn’t trade for the world.

Back to over to you, Sonny—

I have many more Tiger memories. One of my executive officer’s, Bob Williams, son Robbie was a whirling dirvish of activitiy and rowdiness—and went on to become Commanding Officer of Seal Team 3.  Then-Lieutenant Bill Keating’s Uncle John Ahern “tigered” with us many times and had his own seat in the Goat Locker (Chief Petty Officers’ Mess) complete with his own coffee mug. Then-Lieutenant Paul Schultz’ father, Paul Sr., came aboard with his Korean-War vintage DBF Dolphins (Diesel Boats Forever) and the best array of off-color sea stories ever told on a sailing vessel of any era.

What are your Tiger cruise memories either as a Tiger or host of a Tiger? What activities were most memorable? How did you or your parents fund the trip in tight budget situations? What did you learn about your Sailor Dad or Mom that you didn’t know before? How had your young son or daughter matured over the previous six to eight months that surprised you?

Wherever I find a Navy family, the Tiger cruise always comes up in conversation. Let’s start one now!