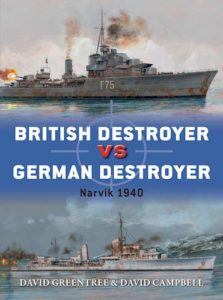 David Greentree and David Campbell’s British Destroyer vs. German Destroyer: Narvik 1940 presents a concise yet detailed look at the destroyers of the two major belligerents during the oft-ignored 1940 Norway campaign that encompasses key aspects that provide the reader a refreshing glimpse from a lower level than the normal histories typically offer, the sea-tossed deck of a destroyer.

The book is organized into multiple sections, which deal with technical aspects (such as chronology, design and development, technical specifications) but also considers the specific units involved, the larger strategic context, the two battles centered around Narvik and finally offers a brief analysis which culminates in discussions of the combat aspects of the 1940 Narvik fighting. The book is well illustrated, with not only a number of period photographs covering both navies but also the typical vibrant color plates along with appropriate maps and handsome line drawings of the various destroyer classes with overhead and side views. For example, a two-page folio comparing destroyer armament replete with crisp images of main and anti-aircraft guns, and torpedoes gives a quick and useful reference. (pp. 26-27)

While only 80 pages in length, this Duel series title focuses on one particular historical matchup to give a better appreciation of the combatants along with their relative strengths and weaknesses in period context. In this case, the April 1940 campaign called Unternehmen Weserübung (“Operation Weser Exercise”), the ultimately successful Nazi invasion of Denmark and Norway. When initial reports arrived, some of the British leadership, among them Chief of the Naval Staff Admiral of the Fleet Sir Dudley Pound, doubted whether the Germans were really attempting an invasion of Norway at all due to the perceived challenges. (p. 42)

To challenge the Kriegsmarine, the Royal Navy dispatched destroyers, which took the fight to the German forces in the narrow fjords and inflicted considerable damage while also taking some losses. Of the two battles of Narvik, the British could rightfully claim a tactical victory, but the Germans gained the strategic win by eventually driving off the Allied forces, securing access to precious iron ore shipments and gaining airbases along the long Norwegian coastline to harass Allied convoys.

For the vastly outmatched Kriegsmarine, Norway turned into a pyrrhic victory that cost them very dearly, thereafter, they would never be able to conduct naval operations on the same scale owing to the considerable loss of warships, destroyers in particular. Norway cost ten of the precious twenty destroyers spanning the Type 1934, 1934A and 1936 classes coming at a time they could ill-afford and production would always lag behind demands.

One of the consequences of the fledgling Kriegsmarine’s piecemeal condition circa 1940 (having planned to be ready for war by 1944) shows in the desperate decision to use destroyers to deliver the mountain troops of Gebirgsjäger-Regiment 139 to distant Narvik for lack of proper amphibious vessels and owing to the vast distances involved. (p. 40) Risking such valuable assets in the name of delivering troops may be seen as reckless to the modern reader, yet the Kriegsmarine simply responded to the exigent circumstances brought on by less than a complete fleet facing off against a numerous and vastly more nuanced foe, the Royal Navy.

Even with the loss of their ships, the ex-destroyer sailors quickly proved useful for the German commander, Generalmajor Eduard Dietl, who benefitted from several thousand unexpected reinforcements, hastily armed with Norwegian equipment, to help maintain his tenuous claim on Narvik. Without their unforeseen stranding, his command might well have lost the initiative due to lack of personnel. (p. 75)

Interesting to note is the British decision to meet with the rising threat of Japanese and German destroyer construction by building the Tribal Class, which saw four units involved in the Narvik fighting. Equipped with twice as many 4.7-inch main guns and less torpedo tubes than normal British destroyers, they acquitted themselves well but still lost twelve of the sixteen during the war. [1]

Both belligerents used torpedo mounts on their destroyers; the British did not carry reloads while the Germans did. British torpedo effectiveness gains warrant consideration, too, a welcome bit of analysis in such a short volume. The main torpedo lesson that British weapons worked better than their German rivals who struggled with “magnetic pistol” detonators which largely failed at Narvik. (p. 74) The anti-aircraft armament of the British vessels, however, proved lacking against the Luftwaffe. For example, Tribal Class HMS Gurkha was lost to air attack on April 9, 1940 off Bergen and thereafter, increasing anti-aircraft weaponry became a priority. [2]

British Destroyer vs. German Destroyer: Narvik 1940 will interest a range of readers, from those interested in the early war campaigns to destroyer operations and even to the level of how such a small force, led aggressively, could play a role in upsetting an enemy timetable even when faced with difficult weather in confusing situations.