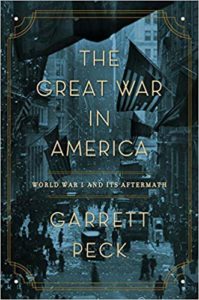 The First World War stands as the one of the great turning points in history. At its time, the most destructive human conflict ever experienced, the world before and after the war were distinctly different. Great empires fell, while others receded, new powers rose and ideas about patriotism, nationality, the role of class in society, the validity of various economic systems and the viability of different government types were subject to reexamination and recrimination. The structural upheavals which followed the war gave birth to the modern world, while the failure to structure a new world order led directly to the Second World War. The resulting post war world map, still largely visible today and still seething with the unsolved challenges of nationality, resources and religion which the war exposed, was never adequately addressed by the post-war planners.

In The Great War in America, author Garrett Peck sets an examination of the United States’ involvement in the Great War with an intended eye for the consequences to the American home front. While providing some insight into U.S. domestic politics and society during the war, much of the book provides overviews of the actual activities of the war, from deployments to logistics to actual battles with asides detailing the experiences and insights of celebrities such as Theodore Roosevelt and Ernest Hemmingway. The latter half of the book is principally relegated to documenting America’s role in the Versailles treaty negotiations. The final chapters relate the immediate post war consequences with greater attention to domestic outcomes in the United States.

Highly readable, The Great War in America, is largely a love letter to Woodrow Wilson.  Fans and students of the wartime president and former academic will appreciate the insight into Wilson’s thinking and approach as well as the author’s willingness to call balls and strikes as Wilson acts on the domestic and world stage. While strongly subjective, Peck is able to connect the immersive narrative as he moves the reader from the beginning of the war in Europe, two years after Wilson’s inauguration in 1912 until his death twelve years later. While not overly critical, Peck definitively provides a Wilson centric view of events as history plays out in the early twentieth century, relating a clear admiration and an understanding of the President’s pivotal role in world events.

Peck’s knowledge of the period spanning the latter gilded age through the depression is extensive as he has amply demonstrated in his other writing. Yet, with the title, The Great War in America, the reader may be disappointed at how little of this book is devoted to the radical changes in American life leading up to, through and in the immediate aftermath of the Great War. Even the ninth chapter entitled “Consequences” takes an overtly political examination of events without much attention to the socio-economic and cultural changes underlying post-war events ranging from race riots to prohibition.

The Great War in America provides an exemplary perspective on President Wilson’s actions and decision making against the backdrop of the Great War and domestic political challenges. Reasonably narrow in scope and crisp in narrative the author provides an insightful look into the United States’ emergence as a great power and the successes and failures of the wartime leader who dared to lead the nation through such a challenging and tumultuous period.  Those knowledgeable or interested in the early twentieth century, the First World War or the interwar period will find this book a useful period reference and a captivating portrait of idealistic leadership in a nation at war.

The Great War in America: World War I and Its Aftermath
By Garrett Peck, Pegasus Books, New York, NY, (2018).