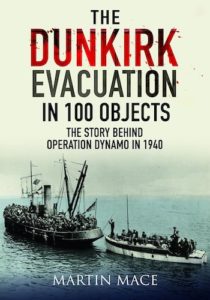 Martin Mace has a wealth of knowledge in writing about military history. Currently, he is the editor for Frontline Books and has over twenty years of experience in publishing and journalism. He has published several books on the subject and has co-authored multiple best-selling titles. In addition, he is the founding editor of Britain at War Magazine, the best-selling military history periodical in the United Kingdom. He brings this marvelous experience to bear in his worthwhile presentation of the Dunkirk Evacuation in 100 Objects.

The purpose of the book is to bring the history of the evacuation of Dunkirk back to life through the items related to the evacuation like first hand accounts, letters, ships, memorials, and places. This book is a great companion among the other books presented by the author to include They Also Served: The Story of the Sussex Lifeboats at War 1939 – 1945 and The Royal Navy at Dunkirk. Starting with the introduction, the reader is provided with a little background information on the events leading up to the evacuation of the British Expeditionary Force (BEF) at Dunkirk followed with select objects interwoven into the narration that becomes the story of Dunkirk of which the items remain to this day for all to see first-hand.

Each of the 100 objects is presented in a way that illustrates the historical relevance to “Operation Dynamo”. I greatly appreciate that the author utilized The National Archives for his research, making this book a great reference for future research and analysis. With spectacular archived photos and first-hand accounts, one can truly grasp the full story behind the operation. Each of the objects is presented in a manner that links the object to a person, further bringing the object and the underlying story to life and how it shaped Operation Dynamo. By doing this, the author was able to successfully paint the full picture behind the story of Dunkirk and how a particular artifact contributed to the success of the operation. The accounts illustrate the sacrifices made by all involved in the operation, making the book more than a compendium of remaining artifacts that which historians and onlookers might marvel.

Clever in his approach, the author expertly used his knowledge to categorize the objects is a way that illustrates the evacuation from start to finish, and why that object is important. The reader can logically conclude that Martin presented the objects in this particular order to illustrate what happened leading up to the decision to evacuate, getting to Dunkirk from all perspectives, events during the evacuation, and after the conclusion of Operation Dynamo. Finally, the author illustrates the ingenuity that went into planning and executing Operation dynamo, because in the end it was ingenuity that prevailed and won the day.

The Dunkirk Evacuation in 100 Objects: The Story Behind Operation Dynamo in 1940
By Martin Mace, Frontline Books, Barnsley, UK, (2018).