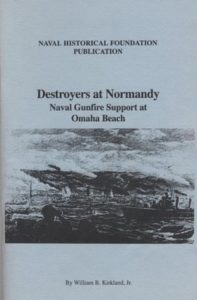 For many years the Naval Historical Foundation published a naval historical blue booklet series on a broad range of topics ranging from John Paul Jones, the resignation of officers of the U.S. Navy at the outbreak of the Civil War, and even a history of the Main Navy Building once located on Independence Avenue in the nation’s capital. Most of these publications have been digitized and posted on the Navy Department Library’s portal on the Naval History and Heritage Command’s website.

One of the more successful and popular of these blue booklets was Captain Kirkland’s Destroyers at Normandy, published by the NHF a quarter-century ago to mark the fiftieth anniversary of the invasion of Normandy. As then NHF president Adm. James Holloway wrote in the foreword:

The landings in Normandy and the defeat of the German army were the Army’s tasks and clearly among its finest hours. Nevertheless, the military victory could not have happened without the naval forces to move the armies across the Channel, to put the troops ashore on the assault beaches, and then to provide the naval gunfire that, with close air support, enabled the assault forces to break out of the beachhead.

Kirkland’s booklet focused on the nine destroyers of Destroyer Squadron 18 as well as three of their British counterparts that arguably played a pivotal in knocking out German fortifications that had savaged the initial assault waves of American GIs and threatened to doom the whole invasion plan. Drawing on primary sources such as deck logs, war diaries, and accounts from Sailors embarked on the destroyers and soldiers who benefitted from the gunfire support, Kirkland’s 84-page monograph has become an outstanding secondary source resource for more recent historians such as Craig Symonds who used it in his recent Operation Neptune documenting the naval portion of the Normandy invasion.

What jumps out in Destroyers at Normandy is intimate relationship between the soldiers of the “Big Red One” and 29th Infantry Divisions having the brutal task of securing a beachhead ashore and the Navy’s “Tin Cans” that steamed right up to the surf line. Kirkland asserts this joint teamwork enabled the Americans to prevail. In his narrative, Kirkland describes three concurrent engagements where to the west, the assault of Pointe du Hoc by the 2nd and 5th Ranger Battalions received support from the destroyers Satterlee and Thompson. East of those cliffs, Carmick and McCook supported landings by the 115th and 116th Regimental Combat Teams and the 29th Infantry Division. Landings on the eastern beaches of Omaha by the 1st Infantry Division were backed up by the Emmons, Baldwin, Harding, Doyle, and Frankford. As Kirkland writes:

The sequence of all three engagements followed a similar pattern: minesweeping, debarkation from transports, prelanding bombardment, and assault landings in three successive waves. After the assault waves went ashore, the destroyers fired at targets of opportunity to help the infantry break out of the landing beaches. Call fire, directed by fire control parties ashore, led to the final clearing of the landing beaches allowing armor and transport move inland. The progress of each phase of the action was quite different; none followed the prepared script.

By moving so close in, the captains of the individual destroyers exposed their crews to great risks. Indeed, a mine claimed Corry before the first Soldiers were able to hit the beach. Overall after three days fighting would cost the Navy two additional destroyers, a destroyer escort, a troopship, and numerous amphibious craft. Army casualties at nearly 3,000 were horrific. As we commemorate the 75th anniversary of Operation Overload, Captain Kirkland’s book is well worth a read to reflect on service and sacrifice of both those who served in the Navy as well as the Army during this momentous event.