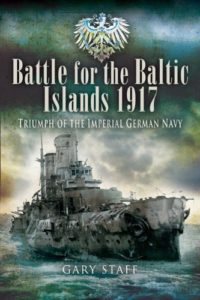 Immediately before and after the outbreak of the First World War, Britain seriously considered sending its fleet into Heligoland Bight and seizing an island base off the German coast – Borkum perhaps. The goal was to force the German fleet out to fight, or bottle it up with mines, submarines and destroyer flotillas, instituting a close blockade of Germany. The chief problem the British faced was entering willfully into the lair of German minefields, submarines, and destroyer flotillas, asking for a battle in their own narrow home waters which the Germans anticipated and planned to win. Plainly too dangerous – the British chose to base their fleet safely distant at Scapa Flow and institute a distant blockade, pending a victory over the German fleet in the North Sea. Yet had the Battle of Jutland resulted in a crippling defeat for the German battle fleet, the British would have certainly undertaken such an unprecedented sea vs. land operation with their own battle fleet, either in the Bight or the Baltic, to break the stalemate on the Western Front and force the Germans out of the war.

Of course this never happened; and the great example of a fleet-against-shore amphibious operation in WWI, the Dardanelles, seems a perfect example of how (and where) NOT to do it. Yet in August 1917, the Germans undertook the complex yet very successful “Operation Albion”. The Russians controlled the Gulf of Riga, cut off from the Baltic by narrow straits between the islands of Osel, Moon, and Dago, barred by extensive minefields covered by heavy shore batteries including 12” guns. Essentially the Russian fleet was holed up behind fortifications in the Gulf of Riga and free to operate there on the sea flank of the German land drive north through the Baltic countries, to Riga, Reval, and the Gulf of Finland, to threaten St. Petersburg and knock Russia out the war. “Operation Albion” involved landing on the three barrier islands, capturing their heavy guns to permit minesweeping of the straits, and breaking into the Gulf of Riga with battleships of the High Seas Fleet to drive out or cut off the Russian gulf squadrons.

“Albion” was a rare case of dreadnought battleships used in amphibious operations in WWI. But their long range guns and air-spotting made them very effective, able to take out long range artillery batteries, provide support in infantry battles, and fire over intervening land barriers to hit Russian naval units. Their movements had to be accompanied by careful, dangerous minesweeping, and they suffered frequent mine damage but no losses, due to their well designed underwater protective systems – in stark contrast to the vulnerability of the Allied pre-dreadnoughts at the Dardanelles. Also the Russian shore guns were mostly in open, visible emplacements in flat country, much easier to hit than the Turkish guns. On the other hand the Russian pre-dreadnoughts had been given a slight advantage in gun elevation and thus range, and managed to harass the German dreadnoughts effectively. Smaller ships on both sides, destroyers, torpedo boats, gunboats, all gave their troops much close-in, effective fire support.

The tactical progress of this campaign had an interesting rhythm, rather like a land campaign based on step by step set piece advances – by outflankings and breakthroughs of carefully planned defensive positions, formed by islands, shoals, and straits. Each German advance and Russian retreat was accompanied by serious but tolerable losses to mines and torpedoes. Perhaps the Civil War siege and penetration of Charleston harbor is the closest historical analogy, on a much smaller scale.

One interesting question is whether German losses would have been less tolerable if the Russians had been more competent. After the February 1917 revolution Russian military forces under the Kerensky regime suffered from demoralization, chaos, and frequent mutinies. Russian ships during Albion had sailors’ revolutionary committees that often disputed with their officers over their orders. Generally the officers kept the focus on the overall plan, and the Russians sometimes fought effectively and with determination, but sometimes their defense folded in a rout. It should be noted that the Germans themselves were only a year away from their own collapse of economy and morale, with revolutionary sailors’ committees in control of their own fleet.

But meanwhile German success in Albion placed the Baltic coast up to the Gulf of Finland, the gateway to St. Petersburg, in their hands, undermining Kerensky and encouraging the Bolshevik coup in November, which brought peace with Germany at the price of the ruinous Treaty of Brest-Litovsk. Of course, this failed to save the Germans, as they hoped, from their own collapse a year later. Could they have avoided that by trying something like Albion much earlier? Perhaps, but it was not until Scheer despaired of achieving results in the North Sea and pinned his faith on the submarine campaign that the Germans felt free to move the High Seas Fleet dreadnoughts to the Baltic.

The campaign this book describes is most unusual and interesting, the coverage is detailed and comprehensive, and the writing is clear and cogent. In short, this is very fine history indeed. It is based on a list of excellent sources, both German and English translations from the Russian, many by important participants including the Russian naval commander Adm. Bakhirev and Adm. Friedrich Ruge, later commander of the Bundesmarine, then a young officer. It is somewhat limited by the author’s stated purpose of providing a complete detailed history of the operation and the resulting battles, and eschewing any lengthy analysis. It also lacks any extensive historical and geographical background. However this can readily be found in Paul Halpern’s A Naval History of World War I, in the section titled “The Baltic.” As for the analysis, we’re still waiting for a complete study of battleships vs. shore-mounted big guns; perhaps the closest thing to Albion, of battleships and infantry cooperating to take out big shore guns, was the Battle of Cherbourg in June 1944. This book is plainly not for the casual reader who does not find the subject matter inherently interesting, but it will richly reward all students of battleships, the big gun, and amphibious warfare.

Battle for the Baltic Islands 1917: Triumph of the Imperial German Navy
By Gary Staff, Pen and Sword Books Ltd., Yorkshire and Philadelphia, (2018).

Reviewed by Robert P. Largess. Robert P. Largess is the author of “USS Albacore; Forerunner of the Future”, and articles on the USS Triton, SS United States, the history of Lighter-Than-Air, and the origin of the towed sonar array.
Click here to buy Battle for the Baltic Islands 1917: Triumph of the Imperial German Navy now!