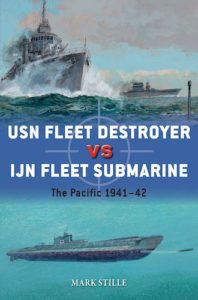 For many years after WWII, discussion of the Japanese wartime submarine force focused on its apparent failure – certainly its failure to achieve anything like the US and German submarine campaigns. Writing in the USNI Proceedings in 1961, Japanese submarine officer and historian Kennosuke Torisu notes that Japanese subs sank only a total of 171 ships in WWII, with nothing like the German record of 2,500 merchant ships alone. The blame was placed on Japanese submarine doctrine and tactics, which were focused on the decisive battle with the American fleet which the Japanese saw as essential for the necessary quick victory they required for a successful Pacific war; the submarine’s tasks were reconnaissance for the fleet and the attrition of major American fleet units.

In this little book, Mark Stille gives a brief, telling rebuttal to this theory. In 1995, in their important The Japanese Submarine Force and World War II, Boyd and Yoshida noted that this force was simply too small to take on two major objectives – fleet support and commerce warfare – at the same time. Where the Germans employed nearly 1,200 and the USN about 340 subs, the Japanese force totaled only 187 boats including obsolete, small, and experimental craft.  At the beginning of the war, only about 45 of these were fleet boats, large, well-armed with effective torpedoes and large deck guns, with high surface speeds, long range and tremendous endurance, and an aircraft for reconnaissance – on the whole excellent craft for the role for which they were designed. They have been criticized for their poor submerged characteristics, and suffered drastic losses to US sub-hunting destroyers – later in the war. But for the first year, 1941-42, USN destroyers were mostly ineffective against them. Boyd and Yoshida conclude that the IJN sub force was indeed correct to have concentrated on the fleet support role, but Stille goes them one further, arguing that in this crucial first year of the Pacific war they achieved a great deal against the American fleet. Perhaps our victory hung on the survival of a single American carrier in the Pacific, and it was the Japanese submarine force that brought us to those grim straits.

Both sides started with six large and fully capable aircraft carriers, the vessels that had unexpectedly proven to be the true capital ships of this war. The Japanese lost four of theirs to our carriers at Midway. This may in retrospect have been “The Battle that Doomed Japan”, but within a few months we had lost four of our own best carriers, with another put out of action, more than evening the odds. We lost the Lexington and Hornet to their carrier air, and the Yorktown to a combination of Japanese air and a submarine. Meanwhile the Wasp was sunk by a submarine alone, and the Saratoga was twice put out of action by submarine torpedoes, missing all the critical carrier battles of 1942. This is an impressive record – especially considering the total failure of the US submarine force to exact any equivalent losses to Japanese carriers during this crucial phase of the war. Indeed the shocking loss of the Wasp, the immobilization of the new battleship North Carolina, and sinking of the destroyer O’Brien by the I-19 on Sept. 15 1942 in the most destructive single torpedo salvo ever launched, ranks this action as a major naval battle. This left the Hornet as the only operational US carrier in the Pacific; then after her loss at Santa Cruz the damaged Enterprise was the only US carrier left in the Pacific. As her crew put it, it was “Enterprise vs. Japan”.

Stille rightly credits the Japanese sub force with pushing the US to the brink of defeat in 1942. He also gives a cogent analysis of its failure to push us over this brink. As with many of their most effective weapons (such as their 24-inch “Long Lance” surface ship torpedoes) it was just not quite as effective as the Japanese expected and indeed needed it to be, to defeat superior American numbers. Stille blames, among other things, over-cautious pre-war submarine tactics for their lack of greater success. Fear of detection, failure to use their surface mobility, overconfidence in their ability to find and attack targets submerged and even on the basis of sound bearings alone – these attitudes were shared with the US submarine force and along with its defective torpedoes explain its own failure to achieve much during this phase of the war.

One problem with this book however, is the “hook” used to attract the reader’s interest, of a “duel” between USN destroyers and IJN subs – it just isn’t there. No instance of a successful anti-sub destroyer action seems to have taken place in 1942 (except one in the Aleutians) and no such action is described in detail. Full details are given for the between -wars US destroyer force, very interesting, important, and beautiful ships in their own right, but no mention is made of their own true moment of sacrifice and glory, the bloody, chaotic surface ship night battles for Guadalcanal in 1942. They eventually gained the technological upper hand over the Japanese submarines and inflicted crushing losses upon them – but that was later.

Aside from this illogicality in presentation, this book is an excellent 80-page handbook on the Japanese submarine force, full technical details of all relevant boats and classes, full history of its creation and performance in action – through 1942. Treatment of the later developments of the war is much more general, which is a bit frustrating. The best way to see this book is the way Stille actually presents it in his text, a carefully considered answer to the question of the success of the Japanese submarine force in its planned fleet-support role in the critical first year of the Pacific war. Again, his conclusion that it was effective enough to bring events to the tipping point, but just not quite effective enough to win, is very interesting and cogent. Time easily fools us into thinking that what happened was inevitable, and reading this certainly restores the sense of the narrow margin that attended the bitter, desperate events of 1942.

Reviewed by Robert P. Largess. Robert P. Largess is the author of USS Albacore; Forerunner of the Future and articles on the USS Triton, SS United States, the history of Lighter-Than-Air, and the origin of the towed sonar array.
Click here to buy USN Fleet Destroyer vs IJN Fleet Submarine now!