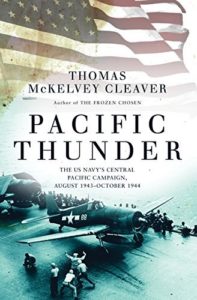 World War II was an air war. That is not to say that other arms were not important, they certainly were, but as the war progressed, victory at sea or on the ground grew to be difficult, if not impossible, without at least local air superiority. Underscoring the importance of air power at sea, Thomas Cleaver’s book Pacific Thunder demonstrates the importance of naval aviation to the successful Central Pacific Campaign that lasted from the late summer of 1943 until the autumn of 1944. As someone who served in the Cold War Navy, the author brings personal experience to bear, supported by the “sea stories” of the many Pacific War veterans who were still serving when the author was a junior officer. Cleaver paints a vivid picture of the Navy’s air and submarine operations in the Central Pacific that were vital to ultimate victory over Imperial Japan.

Pacific Thunder has seventeen short, thematic chapters the author uses to tell his story, and he picked a somewhat unconventional starting point for his examination of the Central Pacific Campaign. The book begins with the torpedoing of the aircraft carrier USS Wasp (CV-7) on September 15, 1942, in an area then called “Torpedo Junction.” This area was 350 miles southeast of the island of Guadalcanal, where American forces fought desperately to maintain a foothold. After the introductory chapter, Cleaver explored the opposing navies and their leaders.  His detail of the US Navy’s and Imperial Japanese Navy’s respective aircraft carriers and carrier aircraft, including their development, are informative and insightful.

After setting the stage, Cleaver told the story of the campaign, often by including perspectives and experiences of individuals who were there. For example, the author discussed pilots, some little known and some famous, the latter including John S. “Jimmy” Thatch and Edward “Butch” O’Hare. The regular inclusion of this primary material helps keep the narrative interesting, with detailed examinations of important innovations such as the “Thatch Weave” tactic for defeating the Japanese Zero, two-fighter “bat teams” of two night fighters and a radar-equipped Avenger, and the “Spruance haircut” method of conducting amphibious operations.

Cleaver’s narrative details several of the major operations of the Pacific Campaign, including carrier strikes that other histories have provided scant detail. The author correctly underscores the importance of these operations. In addition to the carrier raids, Cleaver discusses the significant contributions of American submarines in reconnaissance, attack, and lifeguard efforts for downed aircrew. Interestingly, Cleaver adds a chapter on Captain Miles Browning, USN, who was a World War II-era Captain Bligh. The second-to-last chapter focuses on the critical naval battles surrounding the amphibious invasion of Leyte Gulf, delving into each of the five actions USN and IJN fought. The last chapter has the title “No Rest for the Weary” and details how the Japanese increased their use of kamikaze attacks against the US Navy in the final months of the campaign, which included substantial damage to the carriers Lexington, Franklin, and Belleau Wood. The last act of the chapter and the book is a final set of carrier strikes and then the fast carrier task force turning for Ulithi Atoll.

Pacific Thunder is an important read for those who are interested in the Central Pacific, naval aviation, and submarines. It is an excellent book, but there are a few minor issues or points.  First, the subtitle of the book suggests a broad examination of the campaign, but Cleaver mainly focuses on the air and, to a lesser degree, the submarine aspects of the campaign. A more precise subtitle would have ensured the reader knew the focus of the book before selecting it. Second, there were occasional factual errors. For example, discussion of Leyte Gulf has Nimitz and the Pacific Fleet headquarters in Guam – Nimitz was in Hawaii. While the accompanying text is correct, the map for the Battle of Surigao Strait depicts the USS Missouri, an Iowa-class battleship, in the battle line when it should have been the USS Mississippi, a much older New Mexico-class battleship. Finally, although the author knows his subject, weaving oral history together with written sources to create a detailed narrative of the campaign, he does not have any citations and has a short bibliography, less than three full pages. He does include multiple excellent photos and maps. Pacific Thunder is an enjoyable read that gives the reader a unique sense of the campaign as a whole, the details of the air and submarine contributions, and provides some wonderful individual stories.

Reviewed by Jon Klug. Jon Klug is an Army Colonel and Ph.D. Candidate, ABD, in Military and Naval History at the University of New Brunswick. He taught at the U.S. Air Force Academy and the U.S. Naval Academy, and he holds degrees from the U.S. Military Academy, Louisiana State University, and the U.S. Army’s School of Advanced Military Studies. In his next assignment, Jon will serve as an Army War College Professor.
Click here to buy Pacific Thunder: The US Navy’s Central Pacific Campaign, August 1943–October 1944 now!