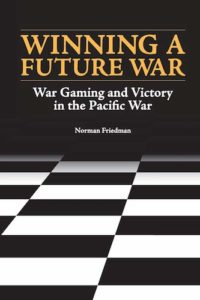 Despite the vast numbers of books written on World War II in the last seventy years, there is still much we do not yet fully understand or appreciate. Prominent Naval Historian Norman Friedman fills yet another of these gaps in our knowledge with his book Winning a Future War. More specifically, Friedman helps us to understand and appreciate the important interwar role the U.S. Naval War College (NWC) and its war gaming played in preparing the Navy and its officers to fight the Pacific War. Friedman convincingly argues that the NWC served as the Navy’s think tank in the 1920s and well into the 1930s, influencing war plans, naval aviation, ship design, and many other important issues that proved critical to ultimate victory over the Imperial Japanese Navy in the Pacific.

The book has seven chapters and several appendices, which focused on the mechanics of the NWC war gaming during the 1920s and 1930s. Friedman first discussed the strategic context for the Navy’s transformation from a “powerful yet unsophisticated force” in 1919 to a two-ocean navy, the largest in the world at the conclusion of World War II. During this period not only did war gaming serve as an educational tool that prepared senior officers to fight the Pacific War, it also informed the General Board of the Navy and the OPNAV War Plans Division for designing the all-arms fleet and specific ships, such as larger fleet carriers, cruisers with additional anti-aircraft weapons but no torpedoes, and destroyers that carried greater torpedo batteries than any other navy. Additionally, this work informed Navy recommendations for the international naval limitations treaties of the day as well as war plans.

The NWC’s educational approach was an “applicatory system” focused not only study, but practicum in the form tactical war games and operational war games. This approach led to a month-long capstone war game that modeled campaigning and made students think systematically and comparatively. In fact, viewing problems from a potential enemy’s point of view foreshadowed today’s red teaming efforts, although Friedman did not mention this specifically. Friedman also discussed how the final game helped the Navy to understand the logistical challenges of fighting across the Central Pacific, which underscored the importance of advanced bases and the need for amphibious assaults to seize advanced bases.

The NWC’s war gaming during the interwar had immense impact on the Navy’s carrier aviation and cruisers, and Friedman devoted a chapter to each topic. As airplanes, especially military airplanes, were still new in the interwar years, there was a lot of guess work, but NWC played a key role in identifying the challenges and helping the Navy to think through these challenges. War gaming also identified that a war in the Pacific would involve incredible aircraft and air crew wastage, which helped the Navy to prepare massive pilot training and aircraft replacement programs. The war games also provided input for the design of aircraft carriers, such as the overall displacement and approach to flight operations. NWC war gaming also impacted on U.S. cruiser design including roles, numbers, and size as well as displacement, speed, armor, and weapons. Friedman seamlessly included discussions of how NWC Blue-Red wargames – pitting the U.S. against the British Empire – impacted overall cruiser policy, including an examination of flight-deck cruisers.

Despite the downfall of the NWC as the Navy’s think tank in the late 1930s, the influence its efforts, especially war gaming, played a key role in shaping the way the Navy thought about strategy and warfighting. Friedman’s final chapter “Games Versus Reality in the Pacific” demonstrated this again and again in a well written and convincing fashion. Friedman did acknowledge imperfections, however. For example, the NWC predicted that the Japanese would “mount night torpedo attacks on the U.S. fleet” and Friedman thus concluded that “the night battles in the Solomons should not have been nearly the surprise that they were.” Knowing of a potential threat and being able to effectively counter it in reality, such as fighting a new enemy armed unknown equipment like the Long Lance torpedo, can obviously be two very different things.

Winning a Future War is essential reading for those who are interested in World War II, navies, naval warfare, professional military education, and peacetime preparation for war.  Moreover, this work comes at a time when war gaming is enjoying a bit of renaissance in professional military education. Friedman’s goal was to provide a “history of inter-war gaming…comparable to the detailed histories of the full-scale Fleet Problems,” and he does that admirably. The author clearly conducted intensive research that effectively underpins his argument, as historians will find his endnotes thorough, informative, and insightful, yet his writing remains accessible for a more general reader. The book adds to the literature focused on the Naval War College’s historical contributions, such as Albert Nofi’s To Train the Fleet for War, Edward Miller’s War Plan Orange, Michael Vlahos’ The Blue Sword, Ronald Spector’s Professors of War, and others. Winning a Future War provides a rare and detailed examination into the inner workings of service decisionmaking and education – highly recommended.

Reviewed by Jon Klug. Jon Klug is an Army Colonel and PhD Candidate in Military and Naval History at the University of New Brunswick. He taught at the U.S. Air Force Academy and at the U.S. Naval Academy, and he holds degrees from the U.S. Military Academy, Louisiana State University, and the U.S. Army’s School of Advanced Military Studies. In his next assignment, Jon will serve as an Army War College Professor.
Click here to buy Winning a Future War: War Gaming and Victory in the Pacific now!