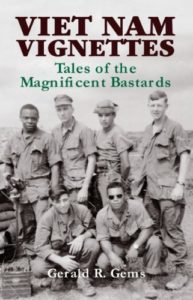 Viet Nam Vignettes is a memoir that outlines the experience of Gerald Gems from the time when he volunteered to enlist in Chicago (1966), to Marine Corps Boot Camp in San Diego, to his first assignment in Hawaii, to a combat tour in Viet Nam, and finally to his discharge and return to civilian life. The book is based on the letters Gem sent home to his parents. The Magnificent Bastards refers to the nickname of the 2nd Battalion, 4th Marines that he served with.

The reader experiences how the innocence of a young man is transformed through his experiences in this vignette, which was pieced together from letters he wrote thirty years after his experience in Viet Nam. Upon discovering letters home, the author formulated connecting elements to provide context to his formative experiences. Fresh out of High School, Gems volunteered for the Marine Corps, along with some childhood friends. This young man’s recollections of experience capture his and his friends’ experiences while providing the reader a first-hand account of the storied 2nd Battalion, Fourth Marines, nicknamed “the Magnificent Bastards” during their combat tour from 1967-1968 in the Republic of Vietnam.

The reader follows Gems from childhood innocence and a sense of adventure, to a battle-hardened veteran, and then a rootless outcast in a country that has changed completely from what he knew when he joined the Marine Corps. Written two to three decades afterwards, the reflection and description of his experiences are still fresh due to the detailed accounts left in his writings. The book highlights extracts and pieces of his letters and ties it together by articulating additional information on what he meant by his words. As a rifleman, he was a frontline troop with direct interaction with the Viet Cong who participated in conflict from Da Nang, Hue, Con Thien, Quan Tri, and into the Demilitarization Zone (DMZ)

While his and his childhood friends experience exhibit maturation and change through the cauldron of combat, the text serves as an ethnography of the actions of 2ndBN 4th Marines through the eyes of Privates to Sergeants. The Battalion faced heavy combat and the text speaks little of interaction beyond the battalion level. Squad, platoon, company and battalion level insight is shared as the battalion’s story is reconstructed through the experiences of four companions who grew up in Chicago.

The value of this book is the first-hand feel of words sent to parents who are wrestling with the unknowns of their son’s participation in combat. Pride, optimism, fear, and relief all play out in chronological order as the author reflects on himself in the third person, articulating key events, feelings and emotions of the experience of war. A combat veteran could appreciate the details of sight, smell and sound descriptions, while an outsider would gain insight of the day to day experience of a Marine Rifleman and his interactions though out his battalion in heavy fighting, to include the urban combat of Hue City and jungle combat of Da Nang. The author does a fine job outlining key leaders, their decisions and the enlisted-man’s perspective of carrying out orders.

The perspectives of an eager high-schooler to the reflections of an NCO who endured a difficult mission show the growth of a young man. His growth is the vehicle in which the story of the “the Magnificent Bastard’s” is told. Though key to the story through the letters home, the book is augmented of the context of other NCOs and officers as the Battalion faces heavy fighting. This isn’t a glorification or an apology of war. This book serves as an attempt to explain “how things were” absent judgment or political insight. The author artfully tells of bravery and tragedy while remaining true to the recorded words of several Marines.

The appeal of this book is in the relatable “through my eyes perspective” of a man who shares deeply his thoughts, fears, joys and stories of childhood friends with his parents. I applaud the candidness of his observations and the trust he had in sharing with his parents. He doesn’t shy from the detail that might be difficult for a parent to hear when their son heads into harm’s way.  To then connect extracts from these letters in a chronological diary, gives the reader an appreciation of what thoughts a developing Marine has in social, training, and combat scenarios.

The flow of this book is logical and easy to follow. Childhood friends and new associates are weaved through the journal, celebrating their liberty antics and combat deeds. From the popularity of little sister’s baked goods being mailed to the Marines overseas to the sadness of injury and death in war, a full spectrum of emotion and insight is shared. The letters from the parents back to Cpl. Gems are not shared, only the letters he sent home. There are times, when the reader may wonder what the parents might have thought when such a vulnerable window into the day to day life of their son was shared.

Gems gives examples of naïve and positive decisions made by others around him, as well as the consequences of their actions. This changes as experience is gained. The growth of the man is an important aspect of the battalion’s performance. Since the perspective is from a young Marine, the contributing factors external to the battalion are not oft discussed. His insight is a user’s perspective which gives several relatable individuals to follow. While his original letters showed a young man’s perspective, the author sought to research, validate and augment his accounts through historic tie-ins to the battalion’s chronology.

The book is not a braggart’s story about success in combat, rather it’s a reflection of small daily events that provide a rich context to the life of a Marine rifleman. His thoughts, fears, and dreams are laid bare as he articulates candidly the experiences he is living. Social interactions with peers who grew up in different socio-economic backgrounds highlight a perspective of acceptance towards unit goals and success when back home Americans were struggling with the Civil Rights Movement.

The Magnificent Bastards faced a tough foe in Viet Nam (the author claims 59 killed and 360 wounded while killing nearly 500 NVA in March of 1968). This book isn’t a campaign study of these battles, rather a reflection of what one Marine saw through his interaction with friends and senior leadership. The battles that 2nd Bn, 4th Marines participated from 1967-68 are discussed and how it was viewed by Cpl. Gems.

This is short, and easy read (147 pages) that could be enjoyed in one sitting. Fellow Marines and Soldiers will find the perspectives relatable. Those seeking an outsider’s perspective of the growth of a Marine from recruitment, through training and combat deployment will gain an appreciation for the reflective and thoughtful mind of an individual as he progresses through these life-changing experiences. It’s an insightful book that looks at the cognitive insight and growth of an individual as he is tested and grows from civilian to combat veteran.