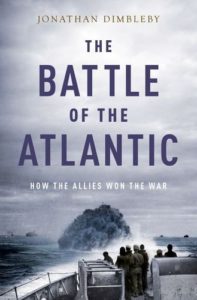 World War II histories that focus on numbers of planes lost, bombs dropped, ships sunk, and tons of supplies delivered are superb at getting to the operations analysis of what turned the war in the Allies favor—but suffer from an objective dullness. The Battle of the Atlantic: How the Allies Won the War is quite different in that it is a book you will find hard to put down. Jonathan Dimbleby is an experienced writer, broadcaster, and filmmaker. Several of his previous books are biographies; he knows how to tell a story that captures the imagination and gives the subject personality and life.

Jonathan Dimbleby’s central point in his new book is that winning the battle for the Atlantic was the key to winning World War II. Until this campaign turned in the Allies favor, an invasion of the continent was out of the question. Up until February 1943, the U-boats appeared primed to sever the lifeline across the Atlantic. Despite heavy losses the ships plying the Atlantic provided essential munitions, supplies, and fuel to sustain the war effort and keep the bomber campaign going. Meanwhile, the convoys through the Arctic to Archangel arguably provided the Soviets the material needed to hold off Germany’s offensive. Only when the Allies defeated German sea power and beat the U-boats did they bring enough troops, munitions, and supplies across the ocean to stage for an invasion of the continent.

The book is well-researched, using many published sources, primary documents and archived interviews. Dimbleby also consulted many experts, resulting in an accurate and compelling narrative. The front matter contains several maps adequate for their purpose, but I would like to have seen them referred to during appropriate points within the narrative and have included locations of the convoys that he spent so much time discussing.

A point that the book makes immediately is that the phony war, so-called because of the comparative inaction between German and British forces, between September 1939 and April 1940, was anything but inactive on the Atlantic Ocean where U-boats inflicted heavy losses on British merchants with relative impunity. Dembleby also debates whether making the bomber offensive the highest priority for procuring long-range aircraft was appropriate because if planes had been given earlier and in sufficient numbers to Great Britain’s Coastal Command for anti-submarine warfare then Allied shipping lanes could potentially have been protected months earlier. Of course, the author doesn’t dwell on this debate, but he does make an important point in that General Harris, commanding Bomber Command, always prevailed because bombing cities on the continent had an inherently offensive objective designed to limit Germany’s war making capacity while protecting convoys was seen as defensive. In theory, the way to shorten the war was to act offensively.

Dimbleby does an admirable job covering the Allied codebreaking, known as ULTRA. He shows that the advantages of ULTRA were many, but not decisive. German codebreakers at the Beobachtungsdienst Observation Service, known to the British as B-Dienst, had cracked the codes used by the Allied conveys and so could facilitate U-boats attacks. Until convoys held the technological keys to beat the U-boats arrayed in front of them, simply knowing of the U-boats presence because of ULTRA intelligence only produced a deepening sense of foreboding of the inevitable horror that was to come at twilight.

What eventually becomes clear is that there was no one thing that turned the tide against the U-boats. Codebreaking, ASDIC (sonar), High Frequency Radio Direction Finding, short wave radar, long range aircraft, night-time illumination, weapons innovations, sufficient convoy escorts including aircraft carriers, realistic training, and improved command and control all worked together to give the edge to the Allies. Dimbleby does not go into great detail about many of these developments but his discussion is sufficient to show their combined impact. If interested in the more technical aspect of the war, I suggest reading Clay Blair’s detailed two-volume work, Hitler’s U-Boat War which discusses that and more.

The significant distinction between Dimbleby’s latest work and others is that he wants the reader to appreciate the hardship and drama experienced by those that fought in the campaign to dominate the Atlantic—from the men at the most senior levels of government who set priorities for the war, to the high commands making decisions on where to deploy military assets, to the junior navy officer on a convoy’s escort, to the merchant seaman plying the seas, even to the mothers and wives creating a family meal from meager rations. He accomplished his goal in spades. His story telling is gripping; his assessments honest and blunt. Anyone interested in World War II narratives, and the war at sea in particular will enjoy this book and find it worthwhile.

The Battle of the Atlantic: How the Allies Won the War
By Jonathan Dimbleby, Oxford University Press, Oxford, New York, (2019).

Reviewed by Phillip G. Pattee. Dr. Pattee, a retired U.S. Navy submarine officer, is a member of the faculty at the U.S. Army Command and General Staff College.
Click here to buy The Battle of the Atlantic: How the Allies Won the War now!