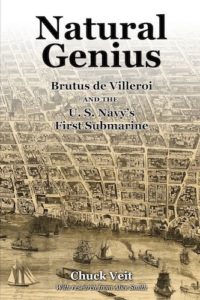 The American Civil War saw a number of innovations in naval warfare among which was the development of the submarine. Most authors focus on the Confederate Navy’s endeavor within this field, however, the U.S. Navy also explored the development of a submarine. In charge of the U.S. Navy’s design and construction of “Submarine propeller,” better known as Alligator, was Brutus-Amédée de Villeroi. The question the author seeks to answer is whether de Villeroi was a charlatan seeking to line his pockets at the expense of the Federal Treasury or were his design concepts, unfortunately, just beyond the industrial technology then available to execute these ideas.

Just who was de Villeroi is a hard question to answer. So much of his life is unknown and the parts that are known are contradictory. He was a Frenchman, born in 1794, who was granted in his home country a number of patents that never earned him any money. During his time in France, de Villeroi designed a number of man-powered submarines, some of which were built and tested.

In 1848, de Villeroi relocated to Philadelphia. Here he was involved in the opening of coal mines and bought some 32,000 acres of land. A host of unanswerable questions concerning de Villeroi’s financial status during this period complicates developing a portrait of him. With no understanding of de Villeroi’s net worth and how he derived this wealth, gaps develop in the story of his involvement in the design and construction of Alligator.

In 1850, de Villeroi signed a contract to salvage the gold lost on board Central America using a submarine called Salvage boat. While Salvage boat undertook successful dives in the Delaware River, the overall scheme was a failure. In 1861, Salvage boat was offered for sale to the U.S. Navy to attack CSS Virginia at her base at Norfolk. The proposed method of attack was for a diver, carried by the submarine, to attach a mine to the hull of Virginia, but the Navy was uninterested in the submarine.

In November 1861, the U.S. Navy entered into a contract with de Villeroi to build a larger submarine than Salvage boat. At first, this new boat would be referred to as Submarine propeller and during 1862 as Alligator. The construction of Alligator would encounter numerous problems and take far longer to build than set forth in the contract. The author paints a fascinating account of the institutional and personal conflicts that plagued Alligator while under construction, while deployed at Fort Monroe, during reconstruction, and when lost at sea. Alligator was never commissioned into the U.S. Navy.

The book contains an interesting set of drawings, accompanied by text, that explains how de Villeroi’s submarine was to submerge and attack an enemy ship. If the Civil War, technological development, or submarines are topics of interest to you, this book is a must read. I will leave it to each reader of this book to decide for themselves whether de Villeroi was a flawed genius or something else.