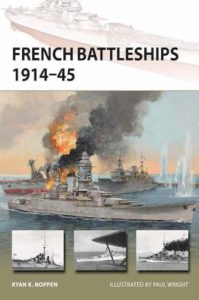 For more than two hundred years, from Louis XIV to the twentieth century, France had the second-greatest navy in the world. It was built to challenge England’s control of the seas and enabled the building of the world’s second-largest overseas colonial empire – and American independence into the bargain. France’s navy always built ships of the highest quality and ingenuity, not excepting the first steam line-of-battle ship and the first ironclad, but the rise of Germany had the strange result of throwing the two old enemies into each other’s arms, with no actual combat between French and English steam and steel battleships – until WWII.

But France’s battleships were always of imaginative and original design, to the point of appearing bizarre next to their more conservative British counterparts. Real tests of their performance in combat were confined to French-built or –designed ships in foreign navies, notably at the Battle of Tsushima in the 1904-5 Russo-Japanese war, where Russian pre-dreadnoughts were severely beaten by their English-built Japanese counterparts. A mistaken investment in the six “Danton” class semi-dreadnoughts, the needs of the French army in WWI, and then the Washington Naval Treaty in 1922 led to a period when the French battle fleet dropped to insignificance, consisting of at best 7 obsolete and inferior dreadnoughts. But in 1932 France laid down the Dunkerque, the first new battleship since the British Nelson and Rodney of 1925.

The Dunkerque was a remarkable ship, and a return to unique and bizarre design, with her eight 13” guns all mounted forward in two quadruple turrets. In fact, this arrangement as well as her tall tower carrying large fire control directors and her inclined internal armor belt and “all or nothing” system of protection, were all based on the Nelsons, likewise designed to achieve maximum gun caliber and range and maximum armor protection on a fixed and limited displacement. But Dunkerque was also the first fast battleship, prototype of the 27 ships built just before or during WWII with speeds of at least 27 to 33 knots. She also mounted the first dual-purpose secondary battery in turrets and the first seaplane hangar. She and her near-sister Strasbourg were, with the two German Scharnhorsts the only such ships completed at the beginning of WWII, and exercised a major influence on naval strategy then. The follow-on class of Richelieu and Jean Bart belonged to the full-sized generation of modern fast battleships of 35,000 tons plus, and were completing in a race with the equivalent “Bismarck”, “Littorio”, and “King George V” classes.

These four French ships had great political and strategic importance throughout their lives, but missed any ship-to-ship combat until after the Fall of France, when the British felt obliged to eliminate them as a potential threat to her command of the sea, attacking them in their African harbors at Mers-el-Kebir and Dakar, as later the Americans did at Casablanca. These actions were extremely interesting but are not well known in detail, perhaps because they were hopeless from the French standpoint, with success meaning only avoiding the ships’ total destruction – which against the odds they mostly did, giving a surprisingly good account of themselves and keeping a diminished or crippled fleet in being as long as the Vichy regime lasted. Students of battleship technology will find the performance of guns and armor in these long-range battleship duels extremely interesting.

The Osprey series of booklets serve to provide, first, a good introductory background on a specific, limited topic, for the beginner or the scholar who needs to fill in a blank spot in his knowledge, and, second, a handbook of well-organized facts, photos, and art for the enthusiast and modeler. This book contains an excellent, informative, and readable historical essay on these ships, their activities, and their political roles, based on a superb bibliography. One can only wish space had allowed even more detail – for example about uncompleted Jean Bart’s epic escape from St. Nazaire on June 19, 1940 starting her engines for the first time under attack by German bombers, or the strange reason for the explosion of the Richelieu’s shells inside her 15” guns, ruining them at Dakar – well, for this type of stuff you must go to Jordan and Dumas’ definitive French Battleships 1922-1956 which includes everything.

This book contains nearly 40 photos, a lot for such a small volume, and many of them never seen before by this reviewer, who has been a French battleship enthusiast for decades. They are full of fascinating detail – but agonizingly tiny! Well, this is unavoidable with the handy and inexpensive format, perhaps, but the book comes up short in the department of technical details, specifications, and drawings or photos of equipment – AA guns, for example. The art comes up seriously short also, I’m sorry to say. There are no detailed plans or cutaways showing the interior spaces of the ships, and the cover is described as showing the Strasbourg under fire escaping from Mers-el-Kebir, but in fact it shows the Dunkerque (which did not get underway) with her distinct and different tower and bridge. Also, the proportions of the paintings are sometimes a bit off.

Still some things about this book are very good; it is well worth reading and having in one’s collection. France’s history is so different from our own – struggling to maintain its place beside a superior power, surviving and recovering after defeat and occupation – that it is always worth studying, if only to eliminate our American blind spots.

Reviewed by Robert P. Largess. Robert P. Largess is the author of USS Albacore; Forerunner of the Future and articles on the USS Triton, SS United States, the history of Lighter-Than-Air, and the origin of the towed sonar array.
Click here to buy French Battleships 1914–45 now!