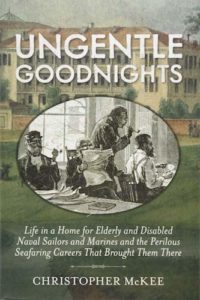 Christopher McKee’s latest work is a beautifully drawn elegy of the sailors and Marines who were admitted to the “refuge on the Schuylkill” in the 19th century. When first opened it was in bucolic setting removed from Philadelphia, with all the best intentions for men who had given years to honorable naval service.

But as the years passed, the city sprawled out to the “refuge” and the ravages of time and drink showed all too often among the residents.

In so many ways, this is the counterpart to McKee’s masterful A Gentlemanly and Honorable Profession: The Creation of the U.S. Naval Officer Corps, published in the early 1990s, and when I interviewed him for Navy Times during his year as a Navy secretary scholar in Washington.

Although in that work, he was reaching back further in time; the surviving written record, covering a smaller group of men, was far greater than for the sailors and Marines of the same century. As McKee correctly notes, most of these enlisted men served their agreed upon time [or jumped ship] and moved on with their lives in a civilian world, many likely never going to sea again.

Even where there is a written service record, with huge gaps, or the “biographies” collected at the asylum, “no subject is more elusive than the married lives — if any of its Marines and sailors.”

McKee’s elegiac tone, which has flashes of humor, senses of melodrama, pathos, and sometimes tragedy, is notably striking in the epilogue when he recaptures spending time in Mount Moriah’s Naval Plot where a number of these men are buried.

“I meet old acquaintances [at the cemetery] whom I know only from the archived paper records of their eventful lives.  The thought is hardly original to me, but no one is truly dead so long as someone remembers that person.”

McKee has done that with this book.

As Ungentle Goodnights make very clear, “concern for the welfare of the long-service sailors and Marine was real and sincere” throughout the 19th century. McKee shows despite the ups and downs of administrations in Washington in their concern for the sea services; the regular pusillanimity on Capitol Hill to spending money on almost anything; the actions of self-important martinets at the asylum itself;  the often-shifting goalposts of winning admission; and old men, down on their luck, willing to lie a little or a lot over their service, their needs, what they would do if admitted, that “concern” remained in place.

Andrew H. Foote’s tenure as the senior officer at the asylum best exemplifies that. As an aside, from what is given here and Foote’s career the Civil War where his successful collaboration with his Army counterparts, that provided the Union with needed early victories, is a life that needs new study.

While Foote preached a gospel of abstinence from alcohol, the reality in this hard-drinking age was “Drinking to excess and its follow-on effects — accidental self-injuries, interpersonal violence, defiance of authority — were far and away the most common and the most challenging behavior problems with which those who administered the Naval Asylum had to cope.”

McKee dives into this subject in important detail that, in the words of one rogue beneficiary, often rendered the asylum “A House of Refuge for Exotic Malefactors” to viewers from the outside.

But that is certainly not the full story that Ungentle Goodnights delivers.

The author is at his best when he tells the life stories, as best as can be gathered by scrupulous searching of the public records, of the men who came to Philadelphia at the end of their naval careers — the good and the bad.

Through this research, Ungentle Goodnights provides the readers with rare insight into the 19th century American Navy by focusing on its enlisted sailors and Marines in the twilight of their lives. As Dr. Edward Shippen noted in a lecture on the asylum at the time the residents, the beneficiaries, were a mix of “curious characters” among the “hundreds of old men, who have deserved well of their country.”

McKee delivers that unique mix of old “shipmates” through a most readable narrative, a pensive and reflective elegy, that is important. Ungentle Goodnights belongs on the bookshelves of all who are interested in sea service history.

Ungentle Goodnights: Life in a Home for Elderly and Disabled Naval Sailors and Marines and the Perilous Seafaring Careers That Brought Them There
By Christopher McKee, Naval Institute Press, Annapolis, MD. (2018).

Reviewed by John Grady. John Grady is a past recipient of the NHF Volunteer of the Year Award.
Buy Ungentle Goodnights now!